During this offseason, starting late in October, I have been publishing a small puzzle every Saturday morning. I have been tuning the style and degree of difficulty of the puzzle, trying to maintain interest without allowing it to be too easy. As it is, there are a couple of folks with sufficient skills to pluck apart my puzzle pretty quickly unless I go hog wild. Well, with Spring Training now upon us we are at the final Guess Who? of this offseason, and in this final installment of Guess Who? I go hog wild.

Because, just in time for Valentine's Day, I am springing a surprise on you! As I have hinted several times this winter, at some point I will post a neat prize. The winner who correctly guesses this particular puzzle will receive two field-level tickets to Opening Day 2014, which is 7:05 PM (game time) March 31st against the Seattle Mariners. These tickets are Section 106, ("All Star" area), row K. They are two seats together. As you can imagine, these are worth quite a few Ben Franklins, even more Andrew Jacksons, but only a fraction of a Woodrow Wilson. That should be enough to light a little fire under you all and take a chance! I don't have the actual seat numbers yet since I acquired them via StubHub and they will not arrive in the mail until the last couple of days before the Opening Day, but they have taken my money already. I will have them in my hot little hands no later than March 29th, and we can make arrangements for a physical hand-off to the lucky winner.

Did you get that? Be the fist to guess this puzzle and get two free tickets to Opening Day!!!

(I apologize in advance to all those HH'ers too far removed to take advantage of this prize. Once the season opens I might figure out something else down the road for another contest, like maybe a Team Store Gift Card or some such.)

The contest is open to anybody and everybody who can get to Halos Heaven, read this article, see the image, and post to Halos Heaven. All submissions are to be posted right here in the comments section. I am counting on the SBN tools to list all submissions in order, so even if there are more than one submission in the same second, the one actually posted first in the split of that second will be closest to the top of the page. No need for tie-breakers. If your post is 100% correct I will name yours as the winner. Everything else posted will result in a response from me (and only if I need to respond at all) with a simple "Sorry, Please try again!" I will not be doing the previous response style of telling you which ones you got right and which ones you missed. That would help everyone else out at the expense of your superior skills. And, therefore, it won't be possible to deduce from prior guesses which parts of those guesses were right and which parts wrong, such that you can figure out the solution without working through the picture itself.

The image below is taken from one or more Topps baseball cards of players in LAA franchise history, mostly known to the slightly better-than-average fan. For the winning entry, I only need to know the player name(s). I do not need to know what position they played, what years they played, what the year was of the Topps deck publication, what the card number was of any Topps edition, etc. Just the name(s). But that information has to be 100% correct. No typos. No extra names. No nicknames. No personal cutesy stuff. No fan-boy stuff. First name and last name as they appear in BBR. No "Jr." or "Sr." or "Esq" are mandatory. Just the regular name or names of the player or players only and exactly.

I have attempted to make this puzzle similar to the most difficult puzzles created over the past couple of months, but still in keeping with people's ability to work hard enough to put the pieces back together for most of the answers. And, I do realize that there are probably more than one of you who have been using graphic tools to reshuffle my imagery. Others have color printers and scissors. All of you have access to Google. I am cool with any and all of that. BUT...because of the stakes in this edition, this one has a few more twists in it. You need to be committed to deciphering the image. In the completely improbable event that there are no winners before midnight, March 20, 2014, I am going to have to come up with something else!

That's it. Before I give you the puzzle, let me help you with some clues.

1st, these are from published Topps baseball cards easily found on the Internet.

2nd, not unlike before, not one single Topps card is completely presented.

3rd, not unlike before, I have messed with the colors to make it harder for graphics pros.

4th, UNLIKE BEFORE, I have messed with orientation. A lot.

5th, in an un-related way, once you get started it gets easier.

6th, you now know all you need to know. 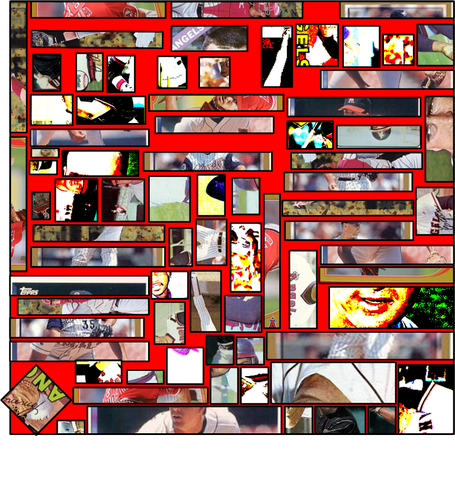