Meet the Enemy: A few questions with AN's Alex Hall

The Angels start a 3-game series against the Oakland A's. Athletics Nation's Alex Hall answers some questions about the team he covers.

Share All sharing options for: Meet the Enemy: A few questions with AN's Alex Hall

The Oakland A's travel to Anaheim this week to play a 3-game series with the .500 Angels.  The two-time defending A.L. West champs are 8-4 and already sit atop the division.

Is another championship in their future?

Alex Hall answers my questions about Scott Kazmir, Billy Beane, Grant Green, will A's fans welcome Mike Scioscia as their club's manager, and what's up with their ugly stadium:

1.  The Angels were burned with the acquisition of Scott Kazmir a couple of years ago, how do you think he’s going to do for the A’s?  Was last season’s turn-around "real" and will he live up to the $22M contract? 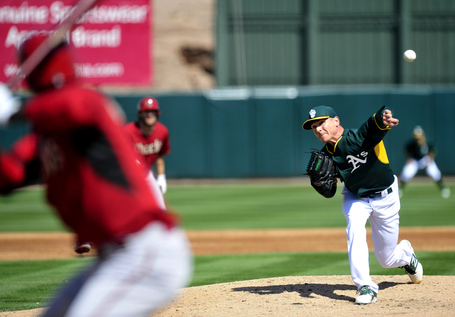 -Scott Kazmir making a comeback with the A's

On Sunday, A's fans saw both sides of what Kazmir has to offer: He was lights-out for six innings, and then he exited early as a precaution with triceps tightness. (link to: Scott Kazmir Injury) What I saw in that game was a pitcher who was relentlessly pounding the zone, who could dial up the velocity when necessary, and who had great command of his secondary pitches. However, you always have to be worried that he could break at any moment and go on the DL. So, there's that trade-off, and that's why he was available in Oakland's price range. Much like Bartolo Colon before him, it seems that Kazmir has been able to find a second life in the majors; in fact, each of their comeback seasons (Kazmir 2013, Colon 2011) was remarkably identical, which gave me hope all winter that Kazmir could build on his initial success like Colon did. If he can stay on the field, I am confident that he will live up to his deal.

2.  After so many years of not spending big on closers, Billy Beane acquired Jim Johnson and paid him $10M.  What caused the change in philosophy?

I think it was simply situation and opportunity. Billy Beane had some money to spend and didn't have anywhere else worth spending it. He recognized that his starting rotation may not be counting durability among its strengths, so beefing up the bullpen may be the best use of those surplus resources. In that way, I doubt that Johnson was a specific target as much as the "best player available." Rather than wait for the market to form and maybe get stuck with a multi-year deal to a guy in his late-30s (Rodney, Balfour, Nathan), Beane struck early and got a guy with a great resume on a one-year commitment. That Johnson lasted about a week in the closer role tells us it was never essential that he be the ninth-inning guy, but rather that he was one more powerful arm to add to an already impressive group. Now the A's only need five or six innings out of their starters and the bullpen can take over from there.

3.  Besides Mike Trout, who on the Angels club would be the best fit for the Oakland squad?  Why?

Howie Kendrick, without a second thought. Although I like Eric Sogard, second base is probably Oakland's weakest position. Kendrick can bring it on both sides of the ball and would not need a platoon partner, allowing Nick Punto to slide into a more appropriate role as the utility man off the bench.

4.  In your questions to me you asked about Grant Green.  I love that deadline deal from last season, but why were the A’s so willing to deal him?  Is there something we don’t know about him?

Grant Green has exactly one major league tool: batting average. I could see him hitting .300 with 10-15 home runs as a best-case scenario. However, he will give back all of that value and more on defense, because he is an absolute train wreck in the field. The A's tried him at several different positions, and he just can't cut it anywhere. It's actually astounding how much the defensive metrics hated him in just 361 innings at second base. Unfortunately, he's unlikely to be a good enough hitter to make a career as a DH, so it's hard to see him carving out an everyday role on a good team. It's exactly where Oakland found itself with another former first-round pick, Jemile Weeks -- even if he had been able to keep his batting average over .300, his utter futility in every other area of the game meant that he still wasn't good enough to start.

5.  Oakland always seems to come up with these great pitchers.  Do you think it’s because of the team’s drafting/scouting ability, their development, or just, as we Angels fans hope, dumb luck?

I think the A's are just willing to look where other teams don't and take flyers on riskier guys, and as such they find an occasional prize in the pile of overlooked talent. Most teams would rather pay for a safe option on the free agent market, whereas Beane can only afford to try to create a starter out of common household items. And the key isn't that every pitcher Beane picks up succeeds; rather, he has an excellent ability to recognize when an experiment isn't working and pull the plug before too much damage can be done. Indeed, if you look back over the last 10-12 years, you won't find any truly disastrous performances from any starter who threw 100+ innings, meaning that Beane is able to coax at least league-average production up and down his rotation. For a fanbase who just suffered through a lot of Joe Blanton, Jerome Williams and the bad side of Ervin Santana, such a modest-sounding prize must sound glorious. So, while any individual success story might have some luck involved, Beane's diligence (trying lots of options even if they initially sound crazy), preparedness (always being ready with a couple extra arms as backups) and trigger finger (quickly recognizing when guys aren't worth extended looks) allow him to keep churning out quality pitchers of value off the scrap heap. I never worry anymore when a pitcher goes down and the A's need a replacement; I now live by the mantra, "Trust In Billy."

Haven't the foggiest idea. One of our writers did a fantastic piece on this topic in March, and anyone interested in learning more should check it out. (link to: At a Crossroads; Standing Still) The bottom line is that there is a stalemate between Oakland, San Jose, the A's, the Giants, and MLB, and it's anyone's guess which direction this might go next. Personally, I just want it to be over, one way or the other, so that the team can move on with planning its long-term future rather than being held captive by Bud Selig and his five-year-old Blue Ribbon Committee.

7.  I’ve got Luke Gregerson on my fantasy team, any chance he become the A’s next closer?  If not, who’s getting that gig?

When Jim Johnson was booted from the closer role, the A's said they would go with a closer-by-committee for the indefinite future. In a breath of fresh air to the sabermetric community, they appear to be doing just that. On Saturday, Sean Doolittle pitched the eighth and Gregerson came in for the save; on Sunday, Gregerson tossed the eighth and Doolittle closed things out. Ryan Cook in back from the DL and will join the mix when Bob Melvin is sure that he's back to 100%, and even Dan Otero could get a shot after saving 15 games in Triple-A last year. It's possible, even probable, that one of these guys will eventually take over the position permanently, but I'll bet that Johnson and Doolittle are the best bets on that front while Gregerson is more likely to take up residence in the eight inning.

8.  Bob Melvin for Mike Scioscia.  Who wins?
You've got to be kidding. Melvin is hugely popular in Oakland, and my understanding is that Halos Heaven is not too fond of its team's skipper. Melvin knows how to mix and match his quirky roster to squeeze the most value out of everyone, and his in-game moves are right more often than they're wrong. Much as I Trust In Billy, I've also learned not to doubt Melvin's decisions because he's proven me wrong so many times. Fun fact, though: Growing up, I was friends with one of Scioscia's nephews, the son of his brother, and he was an awesome guy who was a lot of fun to hang out with (and also a talented swimmer).