MondoLinks: A recap of baseball happenings over this past weekend...and...this week's One Big Idea: Has Major League baseball come up with their first strategy to deal with Mike Trout: Alpha Velociraptor?

The Angels went into the weekend above 500 for the first time in months and months. They then spent the weekend reminding us that they are probably not nearly as good as the squads of recent years who were already not good enough to get into the playoffs. Not a good time to underachieve, what with the toughest division in the League not out West.

Things started out poorly right away, with Hector Santiago being worn down and mismanaged enough to surrender 5 runs at the tail of his fuel tank as the Angels lost 5-2 on Friday. Redemption came Saturday, as representatives from our world's worst farm system, C.J. Cron and Grant Green, got called up and immediately kicked the Rangers in the ass. Adding newbie Collin Cowgill to the trio, the three went a combined 8 for 14 with 4 runs scored and 2 RBI. Good thing, because the only other offensive player to show up was Howie Kendrick and his 4 for 5 night with 2 runs scored and 1 RBI as the Angels beat back the Rangers 5-3.  Which brought us to yesterday. The rubber game.  Tyler Skaggs facing off against Yu Darvish. Skaggs apparently decided to take the day off and he didn't make it out of the third as the Halos got shellacked 14 to 3.

A manager's job includes being the decision-maker who puts his players intot he best possible position for them to win. never forget that. Then read how Joe Smith doing his assigned job 3 out of 3 times is enough to convince Mike Scioscia that an unnecessary change is imminent.

Mike Trout isn't worried about his monstrous strikeout rate this season. Probably because he knows I am already doing all the worrying for the two of us.

Required reading is over at Fangraphs. There will be a quiz on Friday. The best of their "10 thing I Learned..." series is Dave Cameron's article on Friday about Baseball Economics. Read it and remember. It's the basics that all too many are all too quick to forget.

Cinco de Mayo Trivia that you did not know: this day celebrates the Battle of Puebla, when a rag-tag band of Mexican militia defeat of a large invading French military expedition sent forth by Napoleon III. The Mexican side was led by Nacho Zaragoza, who was born in Goliad, Texas, about half way between San Antonia and Corpus Christi. Yeah. A Texan defeated a Napoleon, and Californios created an awesome annual celebration out of the whole thing that has been going strong ever since.

30 games lost. Only 132 games remaining to save face. And incalculably inexcusable that we shall be forced to sit through Jeter-worship this week, before we even get the chance to recognize the loss of our own Jim Fregosi. Which is one error that cannot be undone.)

(Let us note that it took practically zero seconds for the Portland Trail Blazers to show Arte how it's done.)

Nearly two years ago, I happened to notice something with Mike Trout's first at-bat. My eyeball test made them appear to me as if they were throwaways (just an opinion), which inspired me to look into what he was doing with whatever he gained from those. It was that look-see into the bowels of BBR splits that revealed Trout was becoming more and more effective as he had the chance to see the same pitcher over and over again. As i documented, many hitters do this, but none of the current greats were doing this as effectively as Trout, nor could I find any of the past greats who had done this as impressively as Trout was doing.

Basically, what the splits was showing, was that Mike Trout was "testing the fences. But he never attacks the same place twice. He remembered."  Yeah, Mike Trout is the Alpha Velociraptor.

So here we are in 2014. Mike Trout is not a fluke. Baseball has to deal with him. And here I am thinking that I am noticing another pattern. Humans are naturally good at that sort of thing...pattern recognition.

What I think I am noticing is that opposing managers appear to be bringing in a new pitcher - essentially starting the clock back at zero for Trout's learning curve - real close to when Trout comes to bat. Since it is true that Trout improves as he gets more looks at a pitcher, then it follows that a good idea might be to minimize the amount of look Trout gets at pitchers. So I went digging again.

Now, there are three things to worry about here. First, it's early in the season yet. We just finished the on the of April and are still dealing with small numbers. Things could easily change in a hurry. Two, this is tedious, manual, work and the chance for error is definitely there. I have to walk the play-by-play of each game and calculate how far away Trout's turn is at the plate at the time every opposing reliever comes into the game. As such, It's going to be a pretty steep hill to climb to compare to previous seasons and know, for certain, if this year is anomalous. Third, for the same reason, I have no idea how this compares to any other hitter in general, or any other hitter in particular. Unless I find a way to write custom queries against game play-by-play data and some stored procedures to do the calculations automatically, I may never know. And that's presuming that such data is even accessible.

Ok, but what do I know already? Some interesting factoids.

To date, Mike Trout has had 138 official Plate Appearances.

In those, the opposing manager has switched out pitcher when Trout steps up to bat 19 times! And, considering that there have been 30 games to date, Trout has had a first look at some pitcher a total of 49 times out of those 138 PA's. That is nearly 36%.

13 times the opposing manager swapped out his pitcher with only batter ahead of Trout. 9 times with only 2 batters. And, in 4 separate games to date, the pitcher was swapped out at Trout's at-bat twice in the same game!

That's a lot of information, all in text. Let's break out the crayons and make this point a lot easier to understand. In general, over time any single batter out of a rotation of 9 should have a 1 in 9 chance of realizing the opposing manager change his pitcher with their at-bat. And this should be 2 out of 9 chances that the pitcher is changed just ahead of any batter's at bat OR at his bat. And, finally, this should be 3 out of 9 that the pitcher is changed while the batter is in the hole, OR while the batter is on deck, OR when the batter steps up to bat. Got that? Those are 11%, 22% and 33%. Let's look at how Trout is being treated against what should be expected odds: 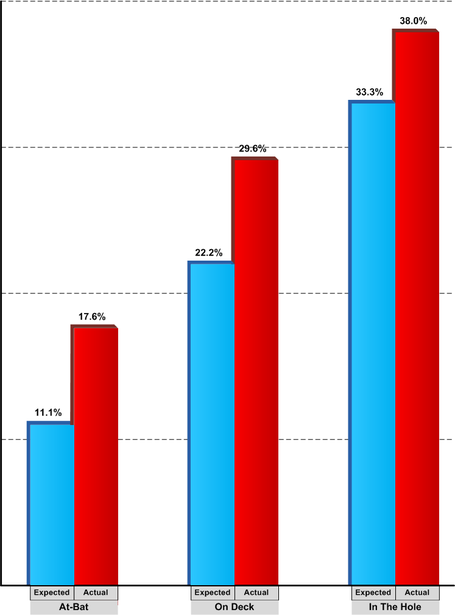 I suspect that I am on to something here. Compared to last year, he is seeing the starting pitchers at about the same ratio. But it's not about how fast he gets into the opposing bullpen. No, it's about how short of an amount of time he gets to observe the bullpen arm before he takes his turn at the plate, and how often he gets to see that same bullpen arm. I have a lot of work to do to compare to last season, not to mention tracking the balance of this season. But I already know that, so far this season, the answer appears to be that opposing managers want to give Mike Trout as little time as possible. Apparently, the theory might now be that f you are looking for a way to shake up Trout The Alpha Velociraptor, make your pitching change right in front of him.