Nike is the world's leader in quality athletic footwear and when they debuted their baseball cleat made specifically for Angels CF Mike Trout, they made sure to invite the world's leading Angels fan site, Halos Heaven, to cover the event. 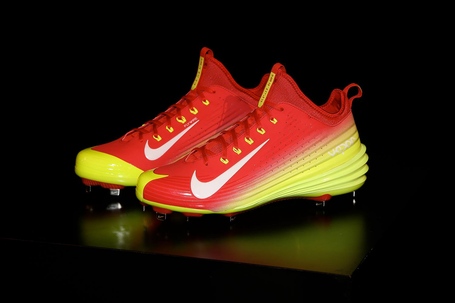 The shoe is called the Lunar Vapor. One of its designers told me it is 50% engineering and 50% aesthetics. It is an awesome thing, visually to behold and judging by Trout's superb play in the field over the weekend after it was released, it is engineered to win. It looks like a futuristic shoe. 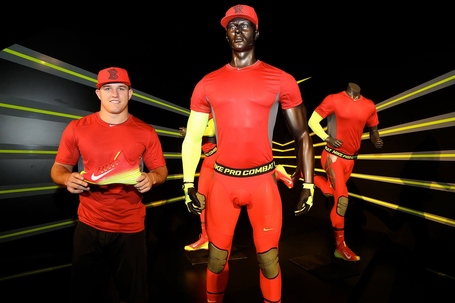 The Lunar Vapor shoe is the first that Nike has made for a baseball player in nearly twenty years. Ken Griffey Jr. and now Mike Trout have their own signature take on The Swoosh. The Lunar Vapor took almost two years to design, fabricate and produce - but this just goes to show that Nike was ahead of the curve in realizing the major star that Trout would become. The only two people who called Trout's superstardom earlier than Nike were Ryan Ghan (proof link) and Eddie Bane (the guy who drafted him). 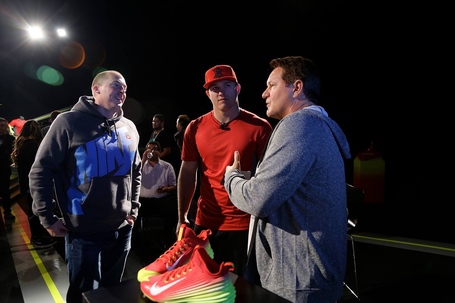 With the Lunar Vapors in the foreground, L-R are Nike Shoe Designer Matt Pauk, Mike Trout and Fox's Chris Myers, oh and blast21dave unwittingly photo-bombing in the back there. Photo: EMS

We saw a wall of Nike baseball shoes used over the year along with memorabilia posters from previous Nike baseball spokesmen, including Pedro Guerrero and Daryl Strawberry. A Griffey signature cleat was there too. We were then ushered into a theatrical setting where a pair of Lunar Vapors sat on a pedestal, almost sculptural. Nike had Fox announcer Chris Myers emcee the presentation of the shoe and spoke with the shoe's designer Matthew Pauk and Nike's manager for cleats, Cameron Shick raved about working with Mike, who told them the basic outline of what he wanted in a shoe: "If I look good, I play good, so make it hot." 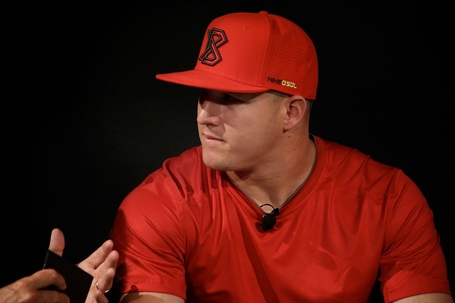 After a discussion of designing and building the shoe with an emphasis on comfort and speed, Trout was brought out. He wore a Nike Baseball logo cap with its distinctive angular "B" that is the closest anyone will ever get to seeing a letter below A on his headware. Our Los Angeles Superstar of Anaheim was genuinely humbled by having a signature line of shoes with his name on them. And yet, he exuded confidence. Humbled and confident is the opposite of the cocky braggadocio that has come to define superstar players. To look at Trout in person I realized just how insecure and scared those ultra-tough jocks are. Trout's grounded nature ensures that his confidence will never get cocky. Like a young Elvis Presley he may already be the King, but he matter-of-factly goes about being King as it comes quite naturally to him. 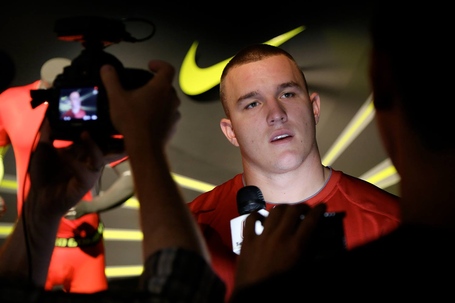 So there was the King and his new shoes. And Halos Heaven was there to witness it all. The media got pics of Trout holding his shoes and then a few outlets got time with him, asking insipid questions about his favorite Derek Jeter memories, and more mainstream inquiries who the toughest pitchers are (Yu Darvish and Clayton Kershaw were his answers) and who the three best AL hitters were (Robinson Cano, Jose Batista and Miguel Cabrera). They got him to go on and on about USA Soccer, for whom he is rooting, but he didn't say much beyond voicing his support. When it came time Halos Heaven got in there and chatted and there may be a video posted of this conversation soon. 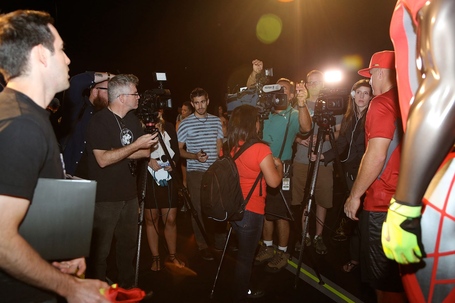 The crush of press around Mike Trout and Nike Mannequins. Photo EMS

After the press-crush, media members were invited to take a short bus ride to Cal State Fullerton's baseball field where Dan Richter, Mike Trout's personal trainer since he worked for Milville High School's baseball team, put us through a workout. I tried to get out of the whole "exercise" thing but Nike had other plans. I was hardly dressed for the occasion, and blast21dave was dressed like a college math professor so we were about to beg off when Nike directed us to the dugout where our nameplates held caps and gear in a swag bag. 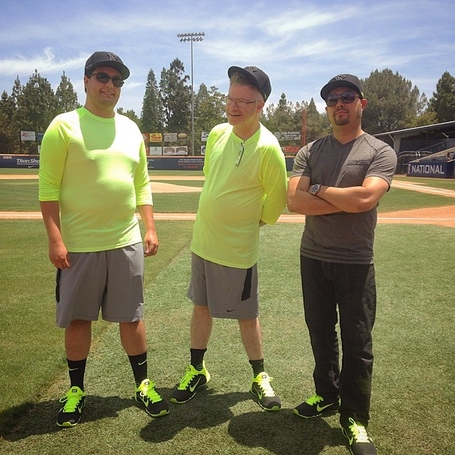 So then we went out on the field and worked out. Danny Farris formerly of the MLB Fan Cave and now with MLB.com was there, but he played college ball, no fair. Dan Richter put us thru the drills  that you see the players go thru about fifteen minutes before game time. Running sideways, sprinting. The Nike gear really absorbs sweat well, it was a hot day and the waterbottles were consumed and nobody has to worry about Dave or myself using these drills to crack a major league lineup, nor really any of the press there (except maybe Danny Farris).

Dan Richter's final drill was to aim us toward the CF wall and try to re-enact a Trout home run grab. I ran half way to the wall and stopped and watched the imaginary home run go over the wall. I will let Dave tell his own tale of woe bouncing off that fence if he chooses but it was sure a sore ride to a nearby hotel for a rinse off. Trout would debut the Lunar Vapor later that night and Nike had plans to make sure we saw the debut, but more on that later this week.