The Angels cruised into Kansas City and got themselves bar-b-qued on their own grill. A couple of bad mound trips, a couple of defensive gaffs, and 16 runs scored are converted into 2 games lost against only 1 win. But it feels like we are close. Very close...

Before yesterday, Howie Kendrick had participated in exactly 1000 Major League Baseball games over an 8 1/2 year career. In that span, leading up to yesterday's game, Howie had 4,078 defensive chances, and he had committed exactly 60 errors. That works out to 1 error every 68 chances. He had 2 errors in 105 chances in April. He had 1 error in 135 chances in May. he had committed, prior to yesterday, 3 errors in 108 chances in June. Kendrick was not due for an error yesterday. He was due for a long, healthy run of pristine defensive excellence. But, you know, sometimes shit happens. And with Murphy ultimately in charge of this particular universe, most of the time when shit happens, it happens in the worst possible situation. It shouldn't have happened. If it did have to happen, it was just as likely to have happened at any of the other 4 chances he had. Last night, it sucked to be Howie Kendrick.
And that sucky feeling Howie had was a very large reason that the Angels dropped 2 of 3 over the weekend to the erstwhile-tanking Royals.
The weekend started off pretty good. Mike Trout hit a monster homer in the first inning that had the Air Force scrambling to intercept from nearby Whiteman AFB. If you pay close attention to the end of the video, you will notice that even plate ump Tim Timmons was impressed, saying something to Trout that grabbed Trout's attention as he crossed the plate.  Anyway, C.J. Cron stepped up in inning #2 and also homered. The Angels were off to a good start against ex-teammate Jason Vargas, and would score 4 more runs off of him in the 5th inning. Unfortunately, in the middle of that, in the Royals' 3rd, they ripped Matt Shoemaker for 7 runs of their own, and they would tack another run on Shoe in the 4th. The Royals would take the opener 8 to 6.

With Tyler Skaggs not quite ready, the Halos trotted Hector Santiago out to the mound on Saturday for one of those riverboat gambler starts. Essentially, it was Bullpen Day for LAA. Scioscia rolled through 5 of his bullpen arms and covered all 9 innings - interrupted by a nearly 4 hour rain delay - and stifling the Royals on 2 runs eked out of 6 hits. David "clutch" Freese showed up, going 3 for 4 and driving in 3 runs to lead the offense, as the Angels evened up the series with a 6-2 victory.

So that brings us to Sunday. Kole Calhoun opened the game with a home run, and Trout scored on a KC error off the bat of Erick Aybar. Calhoun would score again in the 3rd, again the score coming as the result of a KC error. So gifted a 3-run advantage, C.J. Wilson walked out to the mound in the 4th inning and nibbled his ass through 9 batters and into a 3-4 deficit. Wilson threw 16 balls BEFORE he was informed to intentionally walk Billy Butler to load the bases. Not to be outdone, Wilson then walked Alex Gordon on 4 straight pitches all by himself to bring in that go-ahead 4th run. All told, in that inning, Wilson threw 35 pitches total, 15 of those pitches for strikes, 3 of those strikes went for a pair of doubles and a single. Of those 20 total balls he threw, he walked 3 and hit another batter with a pitch. But, hey, he did strike out Jarrod Dyson.

Erick Aybar did tie the game back up with a home run in the 6th. Too bad the bases were empty. Might have been a 2-run homer had Albert Pujols not boneheaded his baserunning. Again.  Kevin Jepsen pitched brilliantly for two innings (the 7th and 8th), and Jason Grilli came out to cover the 9th, score still tied with the Halo bats pretty quiet. Grilli struck out Butler on 4 pitches. Alex Gordon was handed first base in the theory that some dust molecules fell off of Grilli's 3rd pitch as it passed too near the jersey of Gordon, and a few of those molecules had some minor influence on the molecules of one of Gordon's buttons. With one out and a runner now on first, Grilli snookered Salvador Perez into grounding to Erick Aybar for an easy inning-ending double play. Aybar tossed to Howie. Howie heard footsteps and turned too soon, failing to catch Aybar's throw at all. Gordon was now on 3rd and Pedro Ciriaco was subbed in for Perez on 1st (I suppose to run too fast to allow a double play), all with only 1 out. So Scioscia brought up the famously successful 5-man infield, to shut down the walk-off scoring threat. Omar Infante singled anyway. And the Royals fulfilled that walk-off scoring threat, winning 5-4 and taking the weekend, 2 games out of 3. Welcome to Angels Baseball, Jason Grilli!

Other Angel News............Tyler Skaggs should be back in the rotation this week, despite getting shelled in his latest rehab start...........By the way, that home run that Mike Trout hit on Friday is not only the longest home run of the 2014MLB season, by anybody (to date, of course, since he still has a lot of time left!). That home run might be the longest homer ever hit in Kauffman Stadium. And we are talking about a list of moonshots that include those of Bo Jackson and Vlad Guerrero here, folks...........Deadspin has a great take on that homer............Oh, and one last point about that huge homer: this one was off of ex-Angel pitcher Jason Vargas. His previous longest - 461 feet - was also in Kauffman, against ex-Angel pitcher Ervin Santana............Albert Pujols informs us all that he is playing with a swollen lymph node injury. (Cysterna Chyli?)  I guess we are all supposed to feel empathetic and not upset for his screwball effort costing us a critical baserunner yesterday. After all, he was to injured to reach second base at full speed. Sad, right? One wonders why the members of the press present to take note of that excuse failed to inquire why Pujols thus failed to protect both his health and the status of a precious baserunner by not stopping at 1st base???

Sometimes the jokes just write themselves. Guess who Jason Grilli matches up against, career-wise? 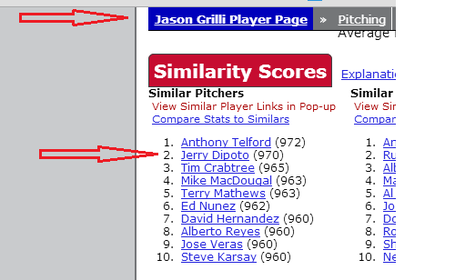 Carpino and Moreno should just bulldoze our Franchise Hall of Fame and make room for some hipster Shocktop beer venue.