Baseball is Back, People!! Your noble servant has re-appeared, riding high upon my trusty unicorn to wave my magic baseball bat and spread my particular brand of pixie dust upon the nation, sweeping away our collective nightmare of jeterism, and re-starting Major League Baseball for all to enjoy.

Well, here we go, folks. The dash to the finish line begins today. Around the country, the general consensus is that the Oakland A's are the best in all of baseball. The Angels, maybe as high as third. But consider, at about 94/95 games into the season, with the two teams only 1.5 games apart, that is practically the equivalent of a tie. Then ponder on this: even though the Angels are only 1.5 games behind Oakland, they are closing hard. And, to date, they have scored more runs, collected more hits, doubles, home runs, stolen bases than the A's. They have a higher batting average, a higher on-base percentage, a higher slugging percentage, and a higher OPS than the A's. The A's pitching staff has surrendered far fewer runs, much lower ERA, and far fewer hits. But the two staffs are almost identical in batting average allowed and pretty close in WHIP. The Angels staff has more saves, which reflects on how fewer times an Oakland reliever is needed to make an appearance under the "save" guidelines, AND a reflection on how much better the LAA staff actually is versus what we were all fretting about back in April. On defense, the Angels have a much better fielding percentage than the A's, and have caught far more opposing runners trying to steal.

Sure, there are lots of other categories to pick from, and a lot of those favor the A's over the Halos. But I am not trying to make any claim that the Angels are some sort of runaway juggernaut. What I am trying to claim is that Oakland is NOT. We are in this, people. Let's go kick some A'ss!

Nuke'Em is a Halo:

This Date in Baseball History: 1882 - Ambidextrous pitcher Tony Mullane takes the mound for Louisville, sans any glove, to face the Orioles. He loses anyway..........1921 - Babe Ruth becomes the MLB all-time career home run leader with his - get this! - 139th home run..........1927 - Ty Cobb collects his 4000th career hit, becoming the first ever to do so..........1939 - Boston Red Sox player-manager Joe Cronin, infielder, had earlier filed a suspiciously poor scouting report on Boston farm-hand Pee Wee Reese in order to hold on to his own job. This results in Reese being traded away to the Dodger on this day in one of history's most lobsided trades ever as Reese will end up in the Hall of Fame and the $35,000 and 4 players sent to Boston end up going nowhere...........1948 - Future Hall of Famer Robin Roberts, pitching for the Phillies in his rookie season, gets himself into a jam in the bottom of the 9th innings versus the Cubs when he yields to the first two batters, putting them on base. Roberts then appears to get out of his own jam by retiring the next two batters. With only 1 out needed to escape, Roberts then plunks the next 2 consecutive batters to give the Cubs the 3-2 walk-off victory (he actually hit 3 batters that day). Roberts' final season, 1966, will be spent as a Cubbie...........1949 - Jackie Robinson testifies in front of the House Committee on Un-American Activities to reject the notion put forth by Paul Robeson that Black Americans would refuse to fight Communism due to domestic racial discrimination..........1954 - Umpire Babe Pinelli forfeits a game between the Cards and the Phillies in favor of the Phillies, when the Cardinals (practicing a little know chapter of The Cardinal Way) attempt to stall until darkness can overtake the game while still in the 5th inning by sending in three consecutive relief pitchers, all while training 8-1. (Hidden easter egg of joy for those few who read this section! Click the period that immediately follows the last word of this sentence.) Pinelli smells the rat and punishes St. Louis using a very rare protocol. Cards manager Eddie Stanky was suspended and ended up making a public apology for his tactics..........1964 - Oddly, considering his 4,256 total hits, Pete Rose hits the only grand slam of his career...........1970 - Willie Mays gets the 3,000 hit of his career..........1983 - The Phillies fire their manager Pat Corrales due to their uninspired record at the time. The Phillies were 43-42. In 1st place. And on their way to a World Series appearance............1999 - David Cone tosses a perfect game as the Yankees defeat the Expos 6-0. It was Yogi Berra Day at Yankee Stadium, and Don Larsen (he of the only World Series perfect game) threw out the first pitch..........2001 - A stadium transformer catches fire at Qualcomm Stadium, and an entire section of outfield lights explodes as a result. This happens during the 2nd inning of a live game between the Padres and Diamondbacks, suspending the game until the following day...........2006 - Buck O'Neil, at the ripe age of 94, signs a one-day contract and surpasses Jim Eriotes (see last week!) as the oldest man to appear in a professional baseball game.

(In Honor of the return of baseball, let's celebrate Take Me Out to the Ball Game)

And here is a link to the 5 Best, Worst and Weirdest renditions.

Finally, out of all the possible places in all the world to spend an eternity in peace, Jack Norworth, one of hte authors of this favored national tribute, is buried here: 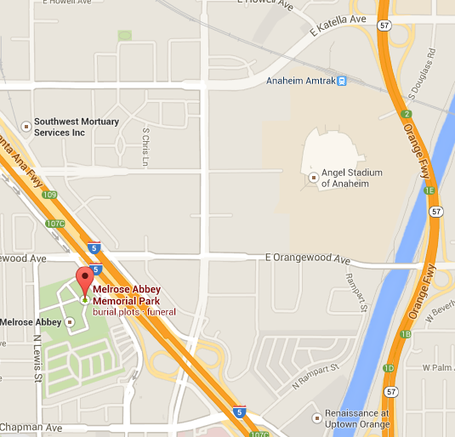 This one is actually kinda cool. I wouldn't mind hanging this in my own garage! At the time of this typing, though, only 3 were left in stock.  Over at Amazon, an LA Angels 18" neon wall clock.

Trout cleats. Why not?............The question was whether or not he actually wore these during the game. Answer: he did!.............And while still on the same subject, I wonder if this thing also flaps about and speaks on demand?............Just a little point of order for those who whine that whining about east cost media bias is a waste of everyone's time. Actually, it does matter. You can bet thta if he had not played his career in the distant burg of San Diego or, hell, wore pinstripes, that would not have happened.............In case you are wondering why nobody wants to be the first AL WC, it's because they will have to face this guy as the second AL WC for all the marbles...........Stay classy, TexASS. Best comment of all: "If you draw the fart bottle, you win. Everyone else has to go to the Rangers game.".........Anthony Rendon of the Nats, left off the NL All-Star team (most likely to enjoy a few beers with Garrett Richards), knows a thing or two about FOX Sports broadcasts............As odd as this sounds, I really think that Mike Trout belongs on this list. After all, if he doesn't have a slump in the second half, he has to, yes?............This guy had an ERA+ of 178 105 when he was with us, just two seasons ago. He currently sits at 173. One might imagine that had we simply kept him, we might have avoided a lot of drama.............Show of hands: who all recalls the days when the Yankees picked off the cream of everybody's roster, instead of the curds?

Saturday: Beer Camp Across America - Northwest Edition takes place at Sierra Nevada Brewing Co. in Chico. This also takes place on Sunday..........Valiant Brewing in Orange, within walking distance of Angels Stadium, is holding a Mid-Summer Beer Fest...........Original Gravity Public House in San Jose puts up their 2nd Anniversary Party............Benze Sports Field in Tehachapi is the site of the Tehachapi Mountain Brew & BBQ Festival............The Lost Abbey in San Marcos is planning to pull off a charity beer event, celebrating Port Brewing Christmas in July.............Ok, not really beer oriented, but certainly beer friendly and a massive throwback baseball pickup game that should resonate with anyone who was once a child with a bat, a ball and a mitt. If you are anywhere near San Diego, The 61st World Championship Over The Line Tourney is in full swing, concluding Sunday............Mammoth Jazz Festival in Mammoth Lakes.