Halos Heaven takes in an Angels game from the Platinum Suite on the day of Mike Trout's new Lunar Vapor series debut by Nike.

Share All sharing options for: Halos Heaven And The Nike Suite Life

Nike is the world's leader in quality athletic footwear and when they debuted their baseball cleat made specifically for Angels CF Mike Trout, they made sure to invite the world's leading Angels fan site, Halos Heaven, to cover the event. This is part two of the day-long media event. Click here for part one.

Following the media event with Mike Trout and Nike's new Lunar Vapor signature series cleat, Halos Heaven's RevHalofan, Cupie and I were invited, along with about fifteen other media members to the game Friday evening against the Texas Rangers.

Our handlers for the evening directed us to the willcall window to pick up our media passes that allowed us entry onto the field for batting practice! 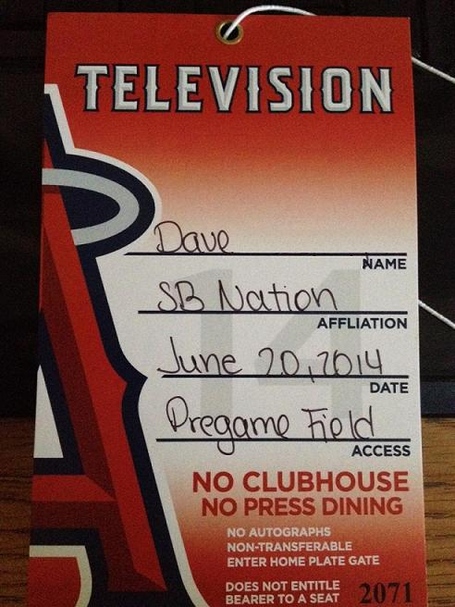 After collecting our Angels cowboy hat upon entering, we were taken through the elevator on down to the dugout suites. While waiting for Cupie to rejoin the group, I saw Angels Spanish radio announcer Jose Mota giving his daughter a tour of the suites in what he called a "Take your daughter to work day". Shortly after, Fox Sports West TV Host Alex Curry walked right by in a hurry and into an interview room. Once Cupie rejoined the group, we were escorted through the tunnel and out onto the field to watch both teams take BP until 6:00 PM 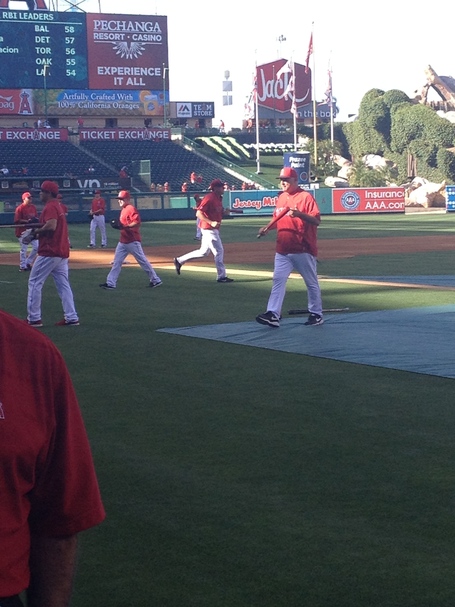 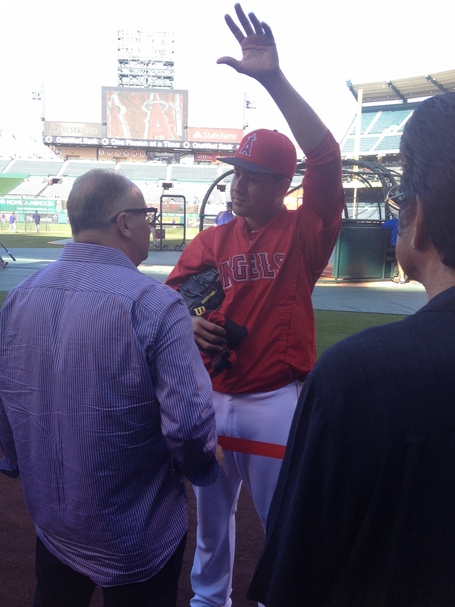 After chatting up with field security, he let me in on a little dirt about the Texas Rangers. They are notorious for not sticking to the MLB gametime schedule for batting practice and warm-ups while in Anaheim. Dragging it out for as long as they can. 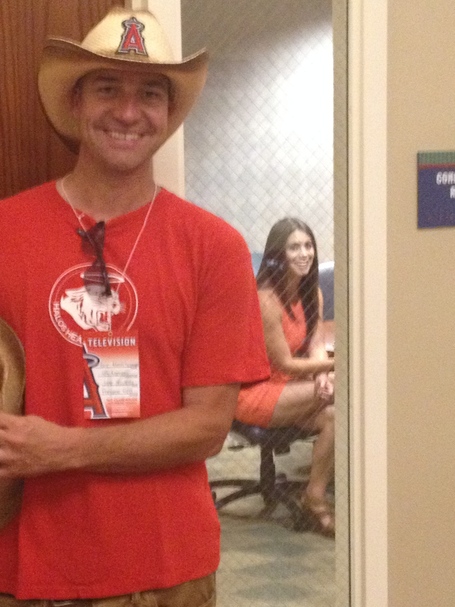 Alex Curry and Cupie for an impromptu photo-op. Photo: blast21dave

Once we made it to the club level and on through to the suites we were treated to this view: 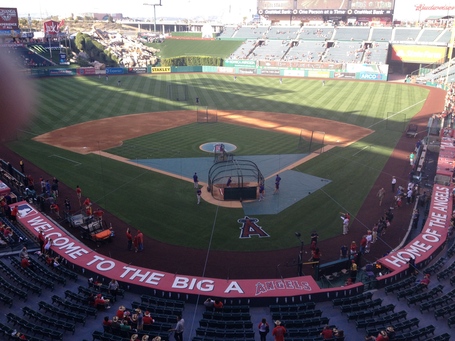 Nike spared no expense in treating their guests to the best of everything and even reserved TWO Platinum-level suites, side-by-side, to watch the game and chat with fellow media types as well as Nike's Lunar Vapor cleat designers and Dan Richter, Mike Trout's personal trainer.

Even if you've already had the privilege of being in an Angels luxury suite, this was far from your typical suite experience. The dining options provided by Nike and the Angels was amazing. 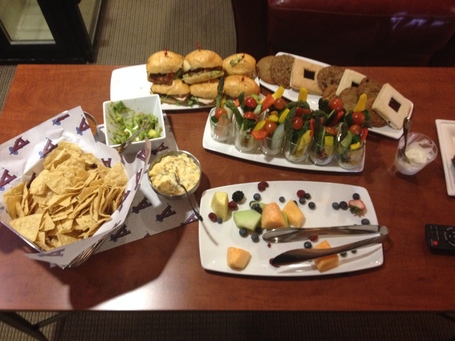 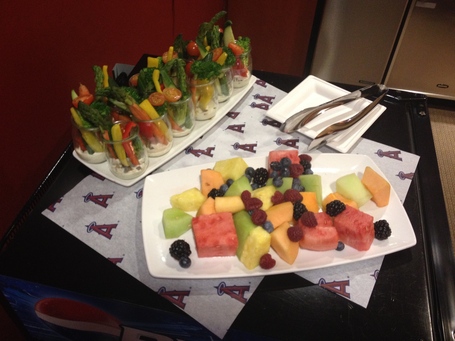 More fruit and veggies that may or may not have survived the evening. In the Pepsi fridge below were various waters and sparkling waters, sodas and I believe some brew as well. 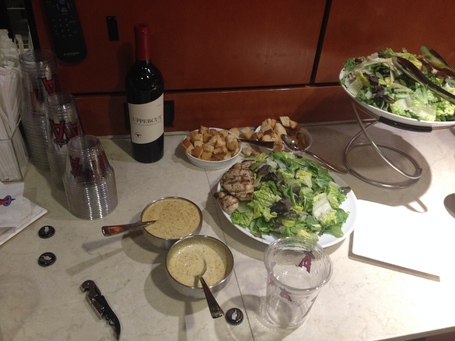 Salads and dressing on your right. Out of the picture: an ice filled bucket with different beers. 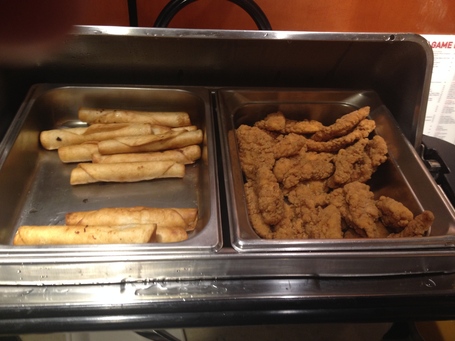 Some heavier fare of shredded beef taquitos and chicken tenders with dipping sauces next to this station. 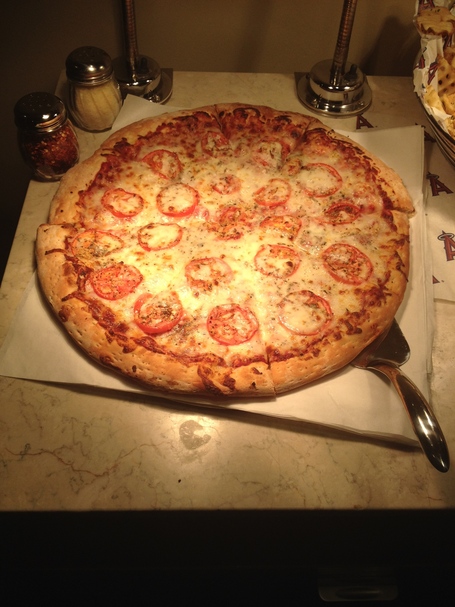 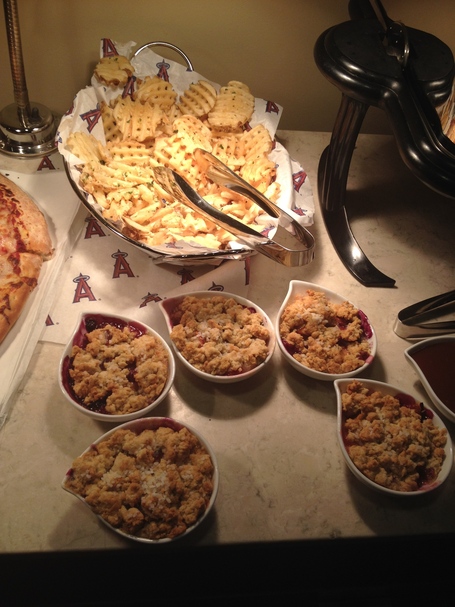 Mmmmmm! Garlic fries and some sort of cobbler. These delicious delectables appeared midway through the evening. 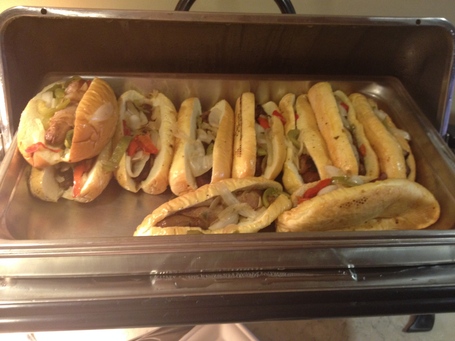 Bacon-wrapped hot dogs topped with veggies. Freakin awesome and definitely Whammy approved. This picture was taken early on since the whole lot of them disappeared later that evening.

Now yours truly was able to sample nearly everything they had to offer and I gotta say, it was pretty good. They had buckets of popcorn but no room for that when the dessert cart was making the rounds in the luxury suite hallway. From chocolate covered candy apples (that they'll cut for you) to s'more cups, macaroons and a host of other treats capped off an excellent dinner.

Oh and in case you're wondering about the... ahem... facilities. They have you covered: 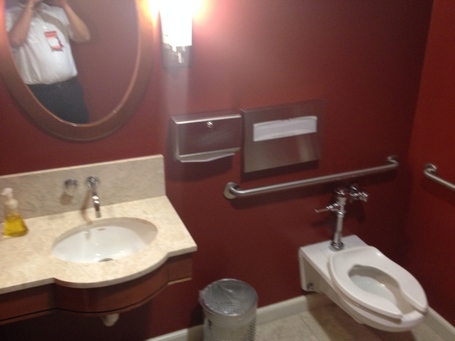 Just as you walk in and off to the side of the luxury suite. Yeah.

On behalf of Halos Heaven, I want to thank Nike for inviting us out to their media event and for the accommodations they so graciously provided that evening. Even after taking a spill off the CF wall earlier that day, taking in the "Suite" life made it totally worth the awkward tumble (and the soreness that followed). High-fives all around when Trout scored a run in his new Lunar Vapor cleats as the #Futuregetsfaster.