Keeping truly international you know that all the junk they give away this week is made in China!

This week might be considered "clinching week" by those of us who follow what the Angels do on the field. But to the barhopping millenials of Orange County, this week is being advertised as "International Week".  On four consecutive days this week, beginning tomorrow night, the Angels will be giving away choice swag while supplies last.

Let's take a look at the swag at hand that is yours for the price of admission: 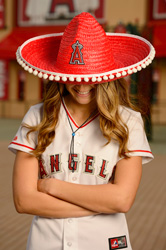 This looks like a fun giveaway and is certain to be spotted on fan heads at the park for seasons to come. Only problem is - where the hell else can you wear this thing? I have tried to incorporate the Halo Cowboy hat giveaway from June into my daily routine and the looks I get tell me it ain't working, fashion-wise.

But the stadium is where one goes to be a goofball partisan so why not add a red sombrero. If you are Mexican you can wear it with double pride and if you are a dorky white folk type you can wear your sombrero with irony at the stadium and be inspired to lurk Tinder.com for some south of the border experience.

To top off the celebration, Arte has hired Mariachis and Folklorico dancers to remind you that Mexico was once a colony of the French and even though the Frogs got their asses kicked they left a little tasteful musique for the Western Hemisphere to appropriate and enjoy. 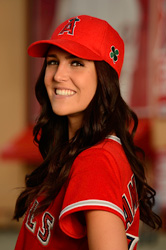 This cap looks to be a keeper. It is your all-purpose Red Angels cap and it has a little "good luck charm" on it as well. Rub that clover during the postseason, folks, please!

Making sure the Irish theme is beaten into the ground, there will be an Irish dance troupe outside the stadium, under the hats. The traditional "Riverdance" of my people involves fancy footwork and no use of the hands. No it is not soccer, it is River Dancing. Frankly, the crap you see now is about as Irish as Frosted Lucky Charms, but hey, if it is a choice between complicated dancing and gun-running for the IRA, world peace demands that we river dance.

They gave something like this out in like 2003 or 2004 and I can say with certainty that this is the lamest giveaway in history - it is a child's toy that is just too complicated for children to get really going. On top of this, it is not loud (like a thunderstick) nor is it "Rally-Inducing" in any way. The sound it produces is weak and does not amplify when dozens or hundreds of them are played simultaneously. It is, however, sickeningly annoying. They should have this giveaway when the Angels host the Dodgers, Red Sox or Yankees, then we could all have a reason to break out our Rally Drums and annoy the people in the seats around us - because that is about all this tinkertot bangbox is good for.

Pregame, outside the stadium there will be a demonstration of Daion Taiko drumming. This is from a bygone era in Japan but it has weathered history to make into cultural studies conversation because HareKare ends with such a mess. The Rally Drum is being given to Japan for international week because if they equate drumming with other parts of the world they will get called racist.

It looks like it may be glass but it is probably clear plastic. There is an Angels Logo and wheat (symbolizing beer) and the word OKTOBER which to a baseball fan should signify the World Series but to a drinker means "Not Just Budweiser On tap This Month".

This is a great giveaway that all Halo fans can have a cold one from year-round. A real keeper. The only thing Germnay is identified with besides Beer is Suspenders and Nazis so this was probably the best choice although I'd make it out to the park for an Angels Lederhosen giveaway.

So there you have it. International Week at Angel Stadium. Let's hope the team clinches the West with one of these giveaways in your hand!