The Angels faced a once-vexing opposing pitcher tonight in the person of Hisashi Iwakuma. The great bat-silencer was pummeled in a four-run, two-out, third-inning rally. Not satisfied, the bats tacked on three runs in the fourth and Iwakuma surrendered the most earned runs of his major league career.

The win gives the Angels a guaranteed spot in baseball's post season, lowers the Magic Number to win the American League West to THREE. Any combination of Halo victories and Oakland losses that adds up to three hands the AL West to the LAA.

But the night was not without tension as Albert Pujols and Matt Shoemaker left the game under the care of trainer Adam Nevala. Pujols cramped up after hitting a bases loaded double that plated three runs. While they were celebrating at the plate, Pujols was grabbing at his upper thigh. Shoemaker left in the top of the eighth inning after giving up his first run with two outs. It was unclear as to why he left - there was no limp, leading the Halosphere to speculate that it was a cramp or pulled muscle in his side.

Shoemaker was a stud on the mound, striking out five Mariners and walking none. He allowed five hits but weaved his way through their lineup like a hit knife going thru butter. He lowered his ERA on the season to 3.04 and got his sixteenth win.That is the most wins by a non-drafted pitcher subject to the draft EVER in baseball history in the 48 seasons of a draft.

Pujols was replaced in the lineup by Tony Campana who hit a two-run single after Mike Trout was intentionally walked ahead of him. That is 5 RBI out of the #3 spot in the lineup tonight. David Freese and Brennan Boesch hit solo home runs just to make it all even that more awesome. 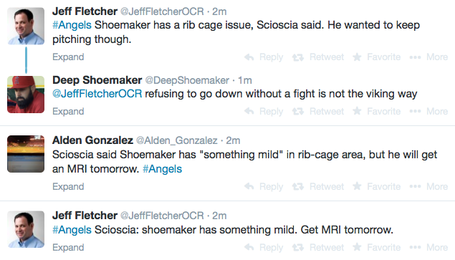 In the postgame press conference, Mike Scioscia said that Albert's cramp is mild but they will not be taking any chances with him. He did not identify Matt Shoemaker's injury specifically but said it was in the ribcage, is mild but that the team would be getting an MRI tomorrow. Jose Mota speculated that seeing as Shoemaker begged to stay in the game is the best sign.