The Angels are being quite cautious with Starting Pitcher Matt Shoemaker.

They took him out of the game last night when he insisted he felt fine and got him an MRI today to see what caused him to hesitate in a wince on fielding a ball from the mound. They discovered a mild strain of the oblique muscle on the left side of his torso. 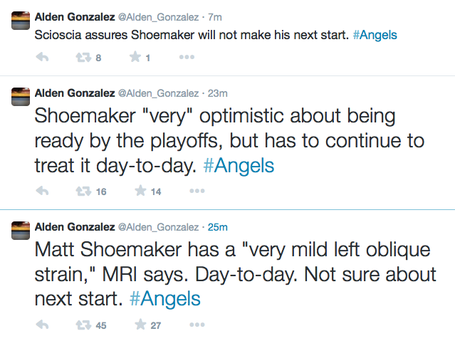 To take care of this the club has confirmed they will skip his next start. He had two scheduled starts left. The Texas Rangers will apparently not have to face him this weekend. His second scheduled start would be Friday, September 26 against the very Mariners team that he manhandled with ease late into the game last night.

If eleven days rest isn't enough for an oblique strain, it is conceivable he would wait until October 3 or 5 for Game 2 or 3 of the ALDS to make his next start.