Share All sharing options for: A Look Back at the Angels 2014 Regular Season (Pt 1)

It goes without saying that the 2014 regular season went well.
We have the best record.
We are going to the playoffs.

But of course that is not enough. We're here to WIN IT ALL.

Before we begin the madness that is playoffs, let's take a look back and see what this season had for us. 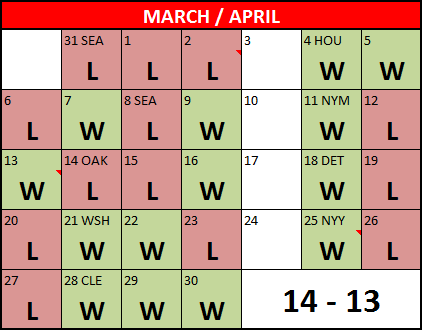 The season started a little rocky, a 3-game losing streak to start the season.
The Angels would win their first on a blowout, then followed up by an amazing start by Tyler Skaggs. [Relive the moment]

Also, this month featured 2 games where the Angels won by the biggest margin (12) in 2014 on April 13th against the Mets which featured FIVE Angels HRs [wow] and on April 25th against the Yankees with help from 4 HRs [Yeah!]


And finally the Indians came to town at the end of the month, and with a sweep, put the Angels over .500 for the first time since the 2013 opening game. [The Party was here]

Which postgame thread had the most comments?
It was the April 23rd game VS the Nationals, where Frieri blew another game on a HR.
Ahh, remember Frieri? [Look back here]

The Angels went 14-13 in March/April.
A rocky start perhaps, but at least it was a winning month! 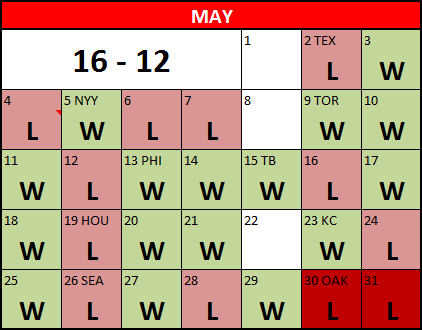 The Angels started May with a rocky 2-4 against the Rangers and Yankees. And actually featured the game where we gave up the most runs... 14. Blech. [Peek at the carnage here] And surprise! This is the game where the Angels suffered their biggest loss. (11)

Also in May was a masterful performance by Jered Weaver, pitching a Complete Game. Sure it was against the Astros... but hey, a CG is a CG. [And a link is a link]

Which postgame thread had the most comments?
Why it's none other than Mr. Mike Trout treating us to his FIRST CAREER walk-off HR against the Rays.
Coming back from a 5-2 deficit to win it all on a walk-off HR? You better bet the comments were flying.
[Hope you like the color green, because the comments are full of 'em]

A 16-12 month. A good month. But i'm sure if you asked ourselves at the end of May how the Angels were doing... wonder what the response would be? 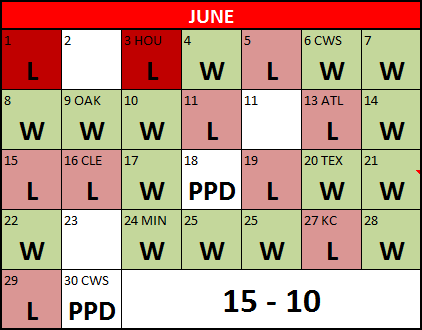 The beginning of the month... once again didn't go so well. The Angels were swept in Oakland, and the first loss against the Astros capped a 4-game losing streak. However, look at it this way... this 4 game losing streak was the longest the Angels had suffered this season.

Once we got back home though, it was promptly followed by a 5-game winning streak. The 5th game being won in walk-off fashion against the A's, in extras, by Mr. Collin Cowgill! [Oh yeah!]

The end of the month featured another pair of sweeps at home, increasing the angels longest winning streak up to 6! If it weren't for a pair of sloppy games, the month would've ended well but... hey, lets look at this positively. This was also the month Ernesto Frieri left the Angels for Jason Grilli.

Which postgame thread had the most comments?
Another walkoff in extras garnered the post comments. This one against the Indians. Oh, and it was a grand slam too! Only bad thing... it was against us. And it was Frieri... [Dangnabbit...]

One last thing... June 21st, the Angels were 6 games behind the A's. Yes, this number sounds familiar right?
This would be the largest deficit the Angels would be at in the 2014 regular season.

Anyway! Did I miss some games? You bet I did. Any games in the first 3 months of the season have a soft spot in your memory? Or maybe something burned in there? Discuss... vent... reminisce...