Share All sharing options for: A Look Back at the Angels 2014 Regular Season (Pt 2)

June 21st, the Angels were 6 games behind the first place A's...
Oh how things would change... 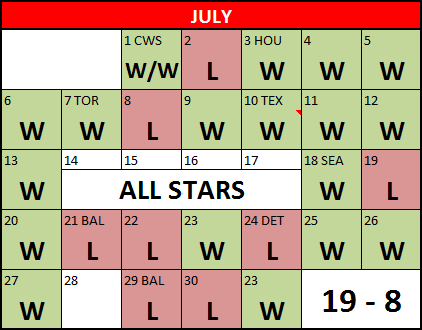 Look at that. 11-2 until the All Star Break. Extend it a little further to an arbitrary game, they were 18-4.

Wins were coming in come-back fashion, rewarding the faithful who always believe until the end.
The win on July 7th marked the 9th Home Victory in a row was stellar. 3 Home Runs to surge the Angels back. [HR fest]

The July 10th game features the game with the Most Runs Scored (15) against the crippled Texas Rangers. It also celebrated Hector Santiago's first win! [ Blow Out!! ]

Or how about the game which may have tightened the Angels even further?
July 20: Bow. And. Arrow.

That should be enough to remind you about this game. Fernando Rodney makes a gesture, shooting a bow-and-arrow in the air, when he locks up a save. But... he did this at the bottom of the 8th? and at our dugout?? The fire was lit. A Mike Trout Walk is followed by an Albert Pujols Double. Pujols celebrates by mimicking the arrow shot (at our dugout of course) and Trout returned the favor. Grant Green would complete the revenge, walking-off against Rodney.

Oh so sweet. [ Relive the moment inside the comments]

FYI, the Huston Street trade for 4 minor leaguers happened the day before. [Still agree with what you thought then?]

July ended with a 19-8 record. If that's not a good month, I don't know what you want. That is a 70% win rate my friend.
However, we weren't all exactly happy. We were still in 2nd place. Slowly creeping up... only to fall back just as things were getting close!! So close.....

Oh... and July 31st? The Day Cespedes was traded for Lester. [Some Reactions?] 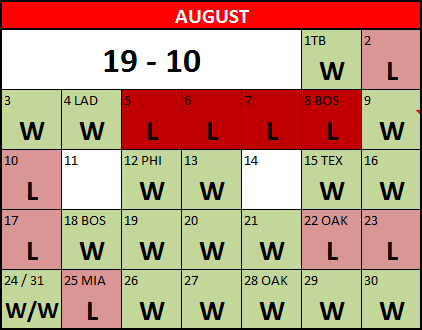 Starting the month losing 3 of 4 to the Dodgers (in a row...) didn't help. Especially since we were 1 game away from 1st 3 times from that span. However, Rev kept things positive. He saw the chink in the A's armor. [ Anything can Happen...]

August 9th featured the Angels longest extra-inning game against the Red Sox. 19 Long Innings. 6 hours and 31 minutes. Capped by a (video-reviewed) walk-off by Pujols. Plus a masterful performance by Garrett Richards, bringing a No-hitter to the 7th! [Walk-off!]

August 16. The Angels Tie for 1st.
August 18. Take Sole Possession for 1st.
August 20. Disaster. From elation to despair. With no time to celebrate, a horrible injury to our starting pitcher, Garrett Richards.  We would eventually find out that it was a torn patellar tendon Playoff hopes were dashed for some.
The Angels pulled out a victory for the game, as the team came together to pull through in the end. [There were still some positivity!]

Fast forward a little... August 26. The start of a 6-game winning streak, and the last time we'd have to worry about anyone else taking our spot in 1st. We sweep the A's to end the month, only to solidify our surge to the top, and watch the A's slide... slide... slide...

(PS: A confidence booster in our bullpen came on August 30. EIGHT Pitchers come together to blank the A's in that game. [Recap that!] ) 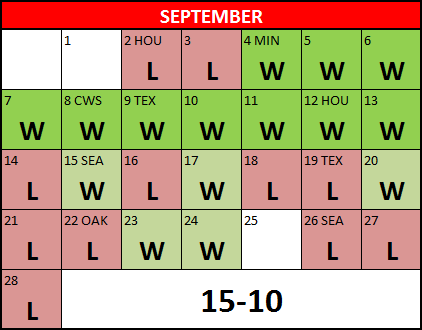 Believe it or not, on Sept 1 Fangraphs made an interesting statement. They gave us a 100% probability of making the playoffs, despite not being mathematically 100%... I had my doubts... The '95 crash isn't foreign to me (ironically, it's what got me to root for the Angels in the first place)

I'm sure losing 2 against the Astros didn't help... but we were able to sweep the Twins, beat the Indians in the makeup game, sweep the Rangers, and beat the Astros twice to rack up a season high 10-game winning streak.

But even with the 2 losses, the Angels lost ground only once. And only by half a game.

By September 10th, the Magic Number turned into a single digit, thanks to another stellar bullpen-led game! [Pujols Triple was in this game too]

September 15th the Angels Clinch a Playoff Berth. The Playoffs!! Except it wasn't all celebrations... Unfortunately both Pujols and Shoemaker left the game early due to injuries. Matt Shoemaker would be sidelined for the rest of the season.  [The Recap]

The next day... a blow out. The Angels lose by 11 to tie their worst loss for the season. Champagne would have to wait...

... til the next day. And we know what happened then. A win paired with (appropriately?) a collapse. [Relive it!]

Let's be fair, the end of the season hasn't been stellar. And most things are pretty fresh in everyone's mind...
So, let's end with this gem though where despite being K'd 12 times in the game, a win was in the cards [Against the As too]


And now we await the playoffs.
Happy? Yes. Satisfied? No.

Discuss away on any games I may have missed!
And let the fun begin...