Sheldon Cooper and the gang invaded Angel Stadium for this week's episode of The Big Bang Theory. On this installment of Halos On Film, we take a look at how it went and what's Raj's favorite thing at the stadium.

Share All sharing options for: Halos On Film: The Big B-Angel Theory

Hollywood: a town that has had a long tradition of taking the stars and landmarks of our national pastime and blowing them up to silver screen proportions, albeit with large, Tinseltown-sized doses of embellishment and grandeur. Baseball and the big screen(and sometimes small screen) have undoubtedly played a large role in our love affair with the game, whether it's aim is to make us cheer, cry and/or laugh. For the most part, Hollywood's eye has been trained on those teams that us Angels fans have probably grown tired of by now: theYankees, the Dodgers, the Red Sox, etc. Sometimes overlooked, however, are the times when Hollywood got it right; when they fixed their gaze south, past Dodger Stadium, and upon the Angels players and the ballpark they call home. This series is about the times we got to see OUR team represented, the times we got to see OUR guys or OUR stadium. It is sometimes amazing. It is sometimes awful. It is sometimes bizarre. But it's also the Angels. And this is Halos On Film. 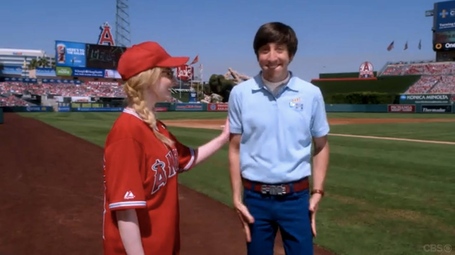 Last night, while the real life Angels were taking a day off and preparing for the upcoming post-season gauntlet, the fake Angels, who reside entirely on screen via the corporate synergized minds of executives and producers, were busy hosting the cast of one of television’s most dubiously popular shows, The Big Bang Theory. It was not the first time our favorite team has made it on to the small screen, and it probably wont be the last, but it may easily be the worst.

The episode is setup as we learn that Howard Wolowitz, the overly-sexualized, NASA astronaut/engineer and belt buckle fetishist of the group, is asked by the Angels to come and throw out the first pitch at the stadium in celebration of their "Space Day". This immediately leads to a force fed B-story of Wolowitz trying to learn how to throw a baseball, because smart people can’t do sports, duh. The A-story of this episode had to do with Sheldon and Amy squaring off, as a couple, against Leonard and Penny and…well, who cares. It didn’t have anything to do with the Angels, unless they were trying to tell us that Sheldon/Amy represented Albert Pujols and Erick Aybar. That I can believe. But back to Howard Wolowitz, after failing at learning how to throw a baseball by playing Nintendo Wii, he is then relegated to being taught how to throw by his girlfriend in an empty gym. Still, though, smart people just can’t do sports, as evidenced by Howard’s growing anxiety, especially after learning that other astronauts passed on the opportunity as they identified early on that it’s a lose/lose situation for the first pitch thrower. How is this wacky geek going to get out of this?!

It took about 15 minutes of show, out of a 22 minute run time, to get the gang to Angel Stadium. I bring this up so you know what I go through for you guys. Anyway, once we’re in the park, things get slightly humorous. The best part of the episode comes when Raj admires the rock waterfall in centerfield. A long debated subject of Angel aesthetic, it made total sense to me that Raj likes the rock waterfall, because his character is a champion of the banal, a resident of the middle of the road; but he’s also lovable and nice enough that it’s no use really to rag on him(similar to the waterfall itself). So it’s okay, Raj. Keep on lovin’ that rockpile. 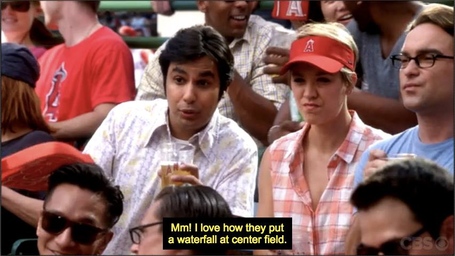 There is then some more "silly banter" in the stands by Leonard, Penny and Sheldon, and then it’s time for Howard’s big moment. He makes his way out to the mound, gives a rousing speech on the power of the mind, geekery, ummmm…some other stuff? I wasn’t paying attention, really. Instead, I was wondering why, of all people, Mike Scioscia’s son is out there to catch the first pitch. Maybe Big Bang Theory takes place in an alternate reality, where everybody on the team is named Scioscia, or one where Matt Scioscia is able to make a big league roster. Either way, Howard ends up throwing a curveball of his own(see what I did there?!?!?!) and announces to the crowd that he will not throw the first pitch, but instead have it done by a working replica of the Mars rover. BOOM! Wolowitz drops the mic, crowd goes nuts. Wait, actually that didn’t happen. What happened was the rover, true to it’s status as a working replica, goes so slow that Sheldon suggests they go to Disneyland, take in a few attractions and then come back just in time for it to cross the plate. Meanwhile, the crowd reigns down the boos on poor Howie(not OUR Howie) as the rover inches it's way towards homeplate, and that’s it. Cut to black, episode over. 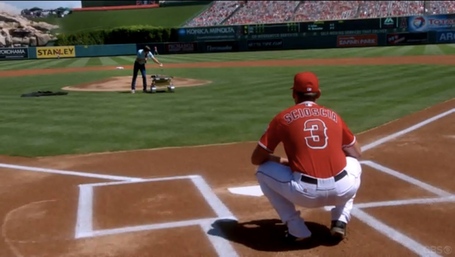 Overall, the meeting of The Big Bang Theory and our beloved Angels and their stadium didn’t really offer up much to get excited about. There were no sightings of favorite players or coaches, and it was over all too quickly. I would rank this somewhere below Nolan Ryan’s appearance on Ryan’s Hope, and it doesn’t even come close to the greatness that was Weezy Jefferson meeting multiple Angels in the locker room or the classic Toaster Glove George burn we got when the Halos met The Jeffersons. But on the pop culture degradation scale, the Angels popping up on Big Bang Theory is still light years ahead of Dodger billboards featuring Nickelback, Justin Bieber and Kim Kardashian. It’s the little victories that count. 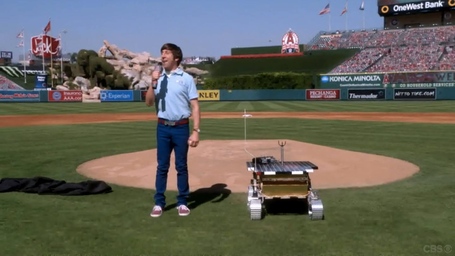 You can go and watch the entire episode via CBS. Or, you know, you could not.

Previously on Halos On Film:

All Dogs Go To Anaheim