The Angels, posting an excellent record post All Star Game despite appearances, found their offense in the couch cushions of Minnesota, exploding for 34 runs on 54 hits over 4 games, and taking their second 4-game series sweep in the past 10 games.

While you were away...the Angels found their offense! It was squirreled away somewhere in the cushions of Minnesota's couch all this time.

Let's be more honest, and less histrionic, for a moment. Post All Star game, the LA Angels have been playing well. Going into the ASG they were sitting at 57 wins and 37 losses, a 60.64% winning percentage. Since, they are 30 and 18, which is still 62.50%. A 62.50% winning percentage across an entire season is 101 wins. So, yeah, despite a lot of issues (a struggling Mike Trout, a benched Josh Hamilton, the loss of Tyler Skaggs, then Garrett Richards, then the wandering mind and meandering pitch location of C.J. Wilson, etc.) what has appeared to be struggling has actually been pretty damned good.

It helps, of course, that 5 of those wins have come against an Oakland team that really has sucked. Turn those 5 wins into losses and we are 25 - 23, 52%. But they didn't lose those 5. They won them. They have been playing tough ball, winning ball, and they have been doing it with just enough pitching when they needed it, just enough offense when they needed it, and pretty solid defense. They have been developing some character, some sense of personality, and we fans are starting to get a sense that the old player cliche of never giving up might really be happening with these guys. They are trending well on their trajectory towards the playoffs. If only they could find one aspect of their team that was just awesome. Then things would really be fun.

So, how about that offense, then?!

Over 4 games against Minnesota the Angels scored 34 runs, climaxing yesterday with a 14-run explosion which saw 11 different players get a hit, 7 of them multi-hit. 19 total hits with 3 home runs, 4 doubles and a triple. All told, for the 4 game series, the Halos cranked out 34 runs on 54 hits with 12 doubles and 3 triples and 4 home runs. Sure, it was against the Twins, a team which LAA has gone undefeated against in 2014, but Ron Gardenhire played things straight up until the 4th game when everything got out of hand.

Thursday: Things started off tight and scoreless until the 4th, when the Angels blew things open with 4 runs by stringing together 5 straight good at-bats. Howie Kendrick doubled in Mike Trout and Albert Pujols, Erick Aybar singled in Howie, and David Freese doubled in Aybar. Life was pretty good for Hector Santiago a teensy-weensy while longer, until the 6th. Hector had given back 1 run in the 5th, but lasted just a little too long before losing 3 a 3-run homer to Eduardo Nunez. Nunez has less power than Peter Bourjos, but it is what it is. Tied we remained until the 9th, when Mike Scioscia took full advantage of a lead-off ground-rule double by David Freese to push all the right tactical buttons and navigate the go-ahead run with sufficient precision to put forth a nice defense and protect that 5-4 victory. (I covered Sosh's strategy in greater depth Friday.) Good, tough, win.

Friday: So let's have some more of that toughness. This one was a see-saw. The Angels scored in the top of the 1st, and the Twins matched in the bottom. The Angels went back into the lead in the top of the 2nd, and the Twins matched in the bottom.The Angels amped back up in the top of the 4th, only to see the Twins match again in the bottom. Finally, the Twins went out in front for the first time in the 6th, pushing the Halos into the 8th still trailing. But Kole Calhoun doubled in a pair and Trout doubled in Calhoun, and the Angels had a 2-run lead. That lead would last until the bottom of the 9th when, with 2 outs, Huston Street surrendered a 2-run double to Trevor Plouffe that fell just beyond Trout's reach and the game was tied. (I still suspect that Trout had second thoughts about that chain-link wall there, and short-armed the attempt. Kind of unfortunate because that is the one stretch along the wall NOT covered completely by the new padding that Minnesota is bragging about.) But the heart of the LAA lineup toughened up again and worked the bases loaded in time for an Erick Aybar sac fly, to go up 1 run, which would hold as the Angels bested the Twins 7-6.

Saturday: Tough Thursday, tougher Friday, toughest of all come Saturday.  Again we had a tight, see-saw battle in early innings.The Angels scored a single run in each of the first 3 innings, but the Twins scored 2 of their own in the 2nd and 4th, sandwiching a single run in the 3rd. That gave the Twins a 5-3 lead which would stick as the game droned through the 5th, then the 6th, then the 7th, and into the 8th. By this time we were pretty much in cruise control on the way to a quiet defeat. And then we had some echos from the Thursday/Friday games. An Albert Pujols single, a Kendrick triple, an Aybar sac fly. Tie game! Done? No. Not done! Come the 9th inning, tied, we see a C.J. Cron single + a Trout walk + a Pujols double + Kendrick single = 3 more runs, and the Angels toughened a late-innings offensive rally into an 8-5 surprise victory.

Sunday: Now toughened into a hardened machine, the Angels faced off against Logan Darnell of the Twins, a newbie lefty who opened the game with an 8.25 ERA spread across a grand total of 3 appearances in the Major Leagues. It would not end well for our young Master Logan. The Angels would nab 5 earned runs off of 5 hits - two of which were homers - in 4.2 innings and the Halos were off and running for a 14-4 rout, capping their second 4 game sweep in the last 10 games.

The offense is clicking, and might be clicking still as the odds are 50-50 that before you even started reading this morning's links the Angels are already swinging away in Cleveland (game time started at 10:05 PDT, so get out of here and over to the Game Thread!)

Elsewhere in the Heavens of Anaheim: Mike Butcher, pitching coach uber-super-duper-genius finally getting his due..........Is Pujols catching fire? Not only did he reach the milestones of 2500 hits and 1500 Runs Scored while in Minnesota, but he collected 7 hits, one of which was a homer, in the 4-game set...........That, by the way , was still not as good of a series as Howie Kendrick enjoyed...........Mike Trout getting dissed for not leading the AL in WAR. As if there was only one accepted method of calculating WAR. Yes, it's true. Josh Donaldson leads Trout in overall WAR in the AL, as calculated by Baseball Reference, 7.0 - 6.6. That's bWAR for you, picking on Trout's weaker defense. Fair enough. But the author could at least try to be honest enough to also note that Trout is dominating in oWAR on BBR with 7.2 (Donaldson is 10th at 4.5) and Trout's second place standing is due to a -0.3 dWAR on BBR (Donaldson shines at +2.7). So the delta is in the D, and the D calculations are fuzzy, which is why BBR differs from Fangraphs, where Trout leads in fWAR at 6.4. Alex Gordon is second at 6.1, and Donaldson is 6th at 5.6. Trout is, indeed, less Trouty than we have known him, but he is still doing a damned fine job of playing brilliant baseball in 2014............By the way, Mike Trout has done yet another something special...........Ok, now that we are all done laughing at the firing of Kevin Towers as GM for the Diamondbacks, your wake-up call is now to alert you that this means that the Dbacks are searching for front office personnel, and why not poach from the best team in baseball? That's right, first on their wish list is our own Hal Morris, Jerry Dipoto's Director of Pro Scouting...........Tyler Skaggs got a dog, needs a name. I might suggest "Wilson".

Around Baseball: It's being rumored that Ron Washington got into it with his boss, Jon Daniels, when Daniels told Wash that Yu Darvish was being shut down for the season. With Wash gone, Daniels has, indeed, shut down Darvish. Now, while there are those who say "no sense in pushing it at this point", due to Rangers' ill fortunes and Darvish still working his way back, I have to wonder if this is not jerking the fans who pay to go out and see what little amazement Texas has to offer - not to mention what impact Darvish might have had with a couple of starts to play spoiler in the AL West playoff races..........New York, for the love of all that is holy, can you be done ALREADY???? I mean, like, bejeebus. And as if that was not far enough over the top, we get this.  As though Babe Ruth, Lou Gehrig, Mickey Mantle and Joe DiMaggio never amounted to all that much...........This was fun: an Arizona Diamondbacks pitcher plunks a Dodger batter after two Dodger home runs, and the umpires end up ejecting...2 Dodgers!..........Is the availability of Instant Replay just making everybody a little bit lazy? How else to explain all the confusion at the end of this Orioles-Rays game?

141 games lost to the opportunity of remembrance, sharing our 2014 journey with the legacy of one of our earliest warriors.

Our patch is HERE. All cotton, embroidered, iron-on. And they are free with a SASE. Just email your request to me and join your fellow HH'ers in the campaign. 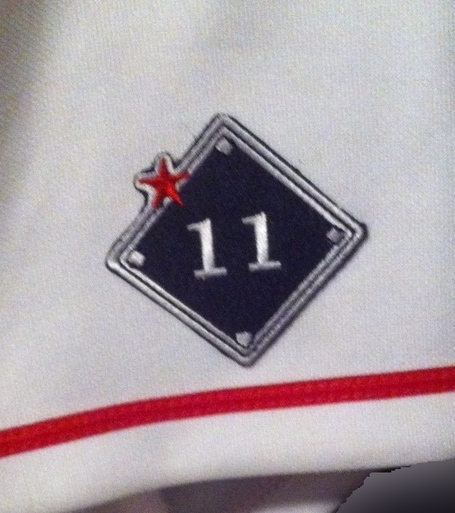 I am starting to believe with Sosh that Trout would be a more valuable defender in LF.

His defensive drop-off from his rookie year can no longer be explained away as the lower value of the position itself, or lack of comfort or familiarity on Trout’s part, or even sulking or heart-ache or some such.

I don’t understand defensive metrics at all, even as shaky as they are. I can see that his Chances per inning has dropped a little from 2012 through 2014 (from .302756 down to the current .291332), and his Put Outs per inning have dropped a tiny bit accordingly (from .298238 to the current .285970). So, yeah, our eyeball test seems about right: Trout ain’t quite the fly ball vacuum that he played as two seasons ago. But I don’t understand why that results in such huge drop offs in his Zone ratings. Note, for the record, that when I took this data Gordon had played in 42.2 more innings, but with 28 fewer chances.

Comparing Trout’s work per inning versus Gordon, Trout continues to average more chances per inning of work than Gordon (.291332 versus .256631) and more actual Put Outs per inning of work than Gordon (.285970 versus .248880). Both of those I can understand as just chalking it up to the business of CF versus LF. But note the difference in drop off between Chances and Put Outs. Trout is at an average of .005362 per inning drop off (not realizing the outs from his chances) while Gordon is at .007751 per inning. Gordon actually realizes a ratio of fewer Put Outs for his Chances than does Trout.

So maybe I need to start by reading this.