The 2015 MLB Schedule has been released - Opening Day April 6th.

Major League Baseball has released its schedule for 2015. The Angels interleague division opponent is the NL West which gives the team six total games against the Dodgers instead of the four they have had in recent years.

The schedule makers got a clue and have given the Halos their easiest schedule, travel-wise, in years. There is a favorable logic in traveling to the east coast and playing lots of games there instead of going back and forth a few times. The team even sticks around in Texas and the Bay Area to play multiple road series.

The game times have yet to be released as teams negotiate for start times on getaway days and national TV broadcast rights determine when many of these games will be played - especially as a team heads toward contention.

Let's look at the year ahead month by month: 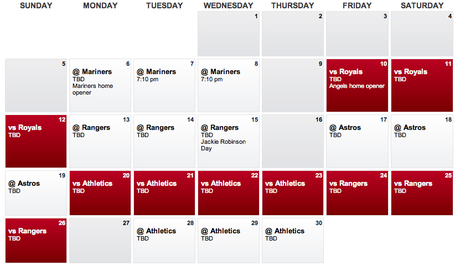 We open in Seattle on April 6 and have an off day after three games. This will be good if there is a question about a fifth starter or if one man in the rotation lags a little behind the other pitchers in Spring training. Our home opener is Friday, April 10 hosting the Kansas City Royals. KC is the only club NOT in the AL West that we face in April. Personally I love this emphasis on divisional play early. The schedule makers have gone easy on us and the first week-long road trip of the year sees the club facing the Rangers and the Astros. 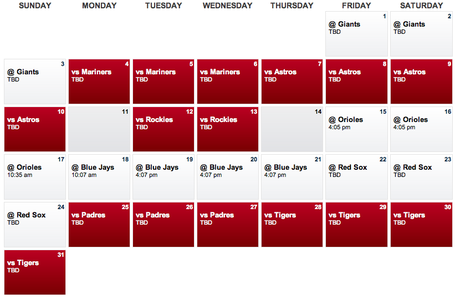 April ends with us in the Bay Area playing the A's. May begins with the Halos staying put in their hotel room and facing the Giants for their first interleague series of the year. Six nights in the same hotel room - that is a rarity in the big leagues. Their homestand after this sees more divisional action and two interleague games with the Rockies. The Angels play in the Pacific Time Zone exclusively from April 20 thru May 13 but that little cakewalk end with a ten-game road trip to the East - the weird thing is the 10 AM start on a Monday (May 18) in Toronto, must be some Canadian Holiday where they celebrate having the Queen of England on their money or something. A ten game homestand starts with the Padres and Tigers to end the month. 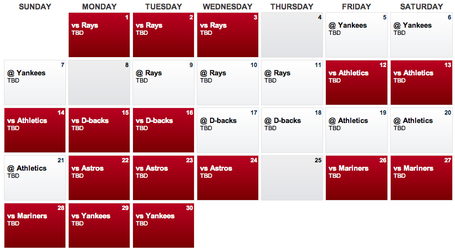 That May homestand gives the Angels three more games to start the month of June and then a trip to the east coast - Bronx to Tampa is an easy trip and the Halos don't see the Eastern Time Zone after June 11 until August 28. Then comes the palindrome Home/Road split - three with the A's and two with the D-Backs at home and then two with the D-Backs and three with the A's on the road. A long home stand at the end of the month sees the Astros, Mariners and get ready to scalp your season seats, the Jeter-less Yankees. 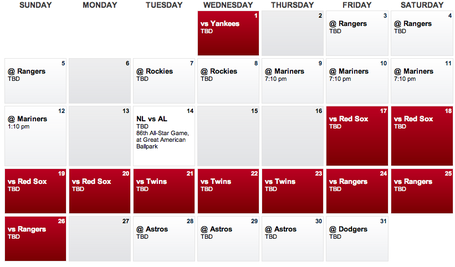 There will probably have to be a firework spectacular at the Big A on the night of July 1 because the Angels leave for a road trip and the All Star Break and are not back in Anaheim until July 17. Get ready to scalp your tickets to FOUR games as the Red Sox visit Anaheim  just twelve days before the trade deadline... followed by three with the Twins and three with the Rangers. The quick roadtrip that ends the month sees the first game against our 5 Freeway rival Los Angeles Dodgers. 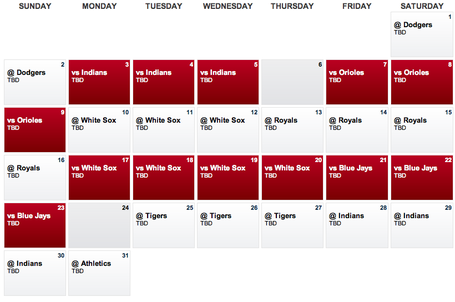 In August, the Angels stay home after three up the street with the Dodgers and host the Indians and Orioles - better in SoCal in August than in Humidityville at their parks. Ah, but then the sultry Summer begins with a road trip to play the White Sox and the Royals. The other road trip at the end of the month takes the Halos to Detroit and to Cleveland for three games - the final Halo stop in the Eastern Time Zone during the regular season. 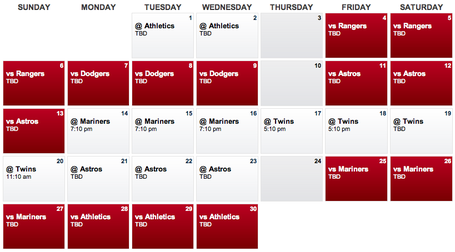 There are twenty September games against AL West opponents plus three off days. There are three home games to scalp tickets for against the Dodgers and just like this year, four road games in Minnesota. The final home game is September 30 against the Athletics but that doesn't mean the season is over, no, because...

There are four regular season games in October, all of them on the road in Arlington against the Rangers. The season ends on Sunday, October 4 and the hope is, as always, that the Angels will play many more games in the month of October.