Back When He Was One of the Good Guys - TOPPS

On New Year’s Eve, a slim envelope in my mailbox announced the arrival of a solitary Topps baseball card—2013 Zack Greinke, purchased on eBay for $1.13. It was one small step for baseball-card collecting, one giant leap for my Angels fandom.

That’s because after five years* and a little bit more than $1,000, I now have in my possession every single main-collection Topps card in the history of the Angels franchise, plus those (like Greinke) whose cards bear the logo of another team, but who played at least a bit in Anaheim (or L.A.) the year before. So Dave Kingman’s 39 Angel plate appearances during his four-team shuffle in 1977 gets his stoned-looking Cubs mug in the plastic sheet between trucker-hatted John Verhoeven and the thousand-year-old Andy Etchebarren (yes, being an Angels completist means owning a whole hell of a lot of forgotten mediocrities). Did I mention that I sort the players each year according to Wins Above Replacement (WAR), with ties going to the accumulator of more Wins Above Average? THAT IS HOW I ROLL, etc. 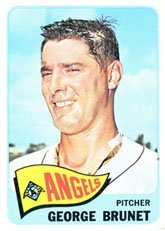 I started this exercise mostly as a way to see what the fellas looked like—whaddya know, Chuck Hinton’s black! George Brunet did not miss a cocktail!—for those years before I started attending games (pre-1973, basically). It’s helpful to have a more complete visual picture of team history, see who ages badly, how mustache fashion (d)evolves, delight in the graphic-design missteps of previous generations; as well as gain some armchair insight into who various people thought our "prospects" were and weren’t at any given time. I’ll be talking more about the lessons learned from my collection throughout the year.

But for now I wanted to explain to those interested a few nuts and bolts about obtaining a pile of Angels card in the first place, since the process can be intimidating to people even half as ignorant about modern-day collecting as I was when I started (and arguably still am today).

Quick background: Like a lot of people, I was an enthusiastic, haphazard compiler of baseball cards between ages 6 and 12 or so. I’m 46, so this was long before people started getting too serious about looking at childish things as "investments." Also like a lot of people, I eventually ditched the shoeboxes; in my case giving ‘em to a baseball-playing pal who was moving to what felt like Siberia but was in fact Riverside. From that point on I would enjoy buying the odd pack once or twice a year, but they would never survive the next move.

So I had no idea about anything when I tiptoed onto eBay in 2009. Here are some lessons I’ve learned since.

1) You will probably end up with 300 Damion Easleys. 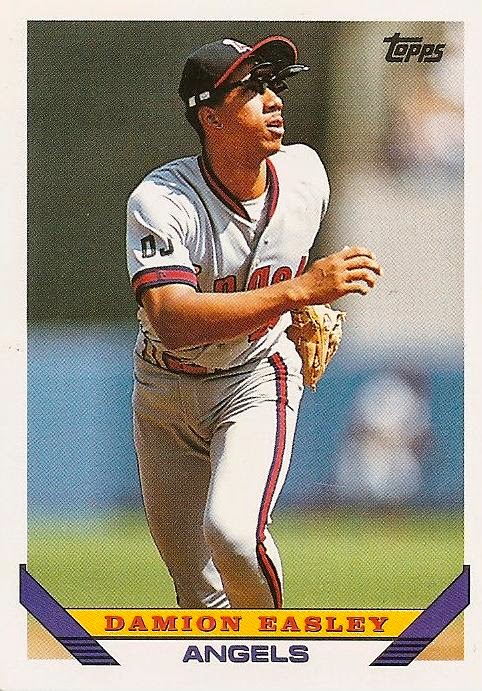 Many articles and even books have been written on the subject, but basically, this weird glut is the byproduct of four events that happened in rapid succession:

I. Topps lost its monopoly, and companies like Fleer and Upper Deck rushed in, cranking out supply.

II. Topps freaked and started flooding the market with all kinds of sub-brands—Stadium Club, Chrome, Gold, The Finest, Opening Day, and so on.

III. There was a speculative price bubble, and then….

Now, you could bone up on all that history, and shape your collecting habits accordingly, before ever hitting "bid." If I would have fully understood that you could buy complete sets of every Angel team since 1980 for no more (and often much less) than $6 apiece using the "buy it now" function, I would have certainly saved a bunch of time, and not amassed so many goddamned Damion Easleys.

But you know what? I played J.V. ball with Damion Easley (true story: he played 2B at Lakewood High; I was at third), and besides, learning through the tactile process of sorting huge stacks, while squinting at various brand labels and gambling on eBay auctions, can be its own educational reward. Time is a scarce and expensive resource, of course, especially when you’re in your working prime (hence the five years of picking discrete late-night windows during baseball offseasons), but if you’re lucky, an understanding spouse may calculate that such a process is still (paraphrasing my own here) considerably less expensive than the convertible, or the skydiving lessons, or the blonde. 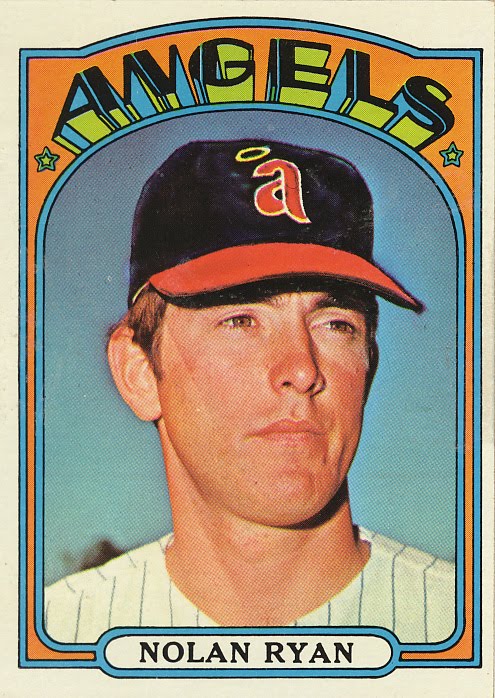 eBay is a national treasure, but it’s not without its pitfalls, especially for the inexperienced collector. In the beginning, when I was just gobbling up huge swaths of cards, then sorting them into years and companies and brands, I would target gaps by searching on team "sets" from a given year. I was not at that time cross-checking each such advertised set against a Topps checklist, in part because Topps does nothing (or did nothing last I checked) to make such checklists remotely accessible. (We will get to that company’s perfidy below.) When the auction price for a certain year was low enough, I’d strike, and rummage through the booty later.

What I would eventually find is that the team sets would invariably be missing a card or three, and that those cards would almost all be Nolan Ryan, who was obviously just about the only Angel worth collecting in the ‘70s. The pre-Ryan Ryans tended to either be Jim Fregosi/Dean Chance, or (even more likely) high-numbered cards from 1960s sets. Sure, being a future Hall of Famer is good for card prices, but #584 in the 1967 batch? Boom! Thirty-four dollars for you, Mr. Piersall.

If you are compiling the cheap stuff first, this may not be an immediate bother. But if you are a completist without patience, then you’ll want to make sure you compare any team set against the full checklist from that year. You’ll pay more in sticker price, but you’ll also pay less in shipping costs and frustration.

3) Topps is the goddamned worst. 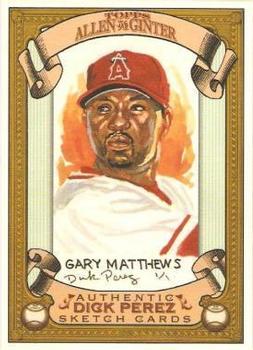 Ah, but here’s where it gets worse. While panicky Topps execs in the early ‘90s were trying to gin up artificial premium brands—which for every decent product like Heritage and Total contained exponentially more Xeroxed copies of the root card only with shiny green chrome sparkly overlay or some shit—they also decided, oh, well, let’s just cut our core product line IN HALF.

I own roughly 1,000 Jim Eppards and Kyle Abbotts, but no Wonderdog barking at Seattle in ’95? For shame.

Besides mangling the inventory, confusing the brands, flooding then starving the market, the company has done nothing at all that I can see to make its existing and past stock searchable or understandable in the least. By the time your collecting starts to hone in on specifics, tracking down potential missing cards, this REALLY starts to irritate.

Remember how I started this entry with a word about Zack Greinke? Zack was the last in my collection because I literally could not figure out which of the many thousand Topps brands his real 2013 card belonged to. Here’s a hint: When I am trying desperately to consume your product, don’t make it deliberately harder for me to find. Assholes. 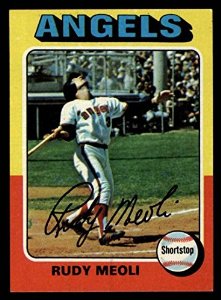 When I lived in D.C., I was lucky enough to discover a great store called House of Cards. In fact, it’s possible that I went there looking for a gag gift for a friend who shares my appreciation of ‘70s pitchers wearing windbreakers for undershirts, and in the process of flipping through the store’s 1975 boxes I started nabbing the various Rudy Meolis on display and thought to myself, "Huh, I sure wouldn’t mind having more of these!" A good card shop will have some low-hanging fruit you can gather in cheap bunches (without the shipping cost), and as importantly, some friendly neighborhood expertise/banter about how you finding the harder stuff.

My big sadness upon moving to Brooklyn was discovering that the very best card shop in all the five boroughs—one so great they made a documentary about it—was less than a five minute walk from where I type this…but had closed down two years before I arrived.

5) There are fringe benefits to collecting ignorantly. 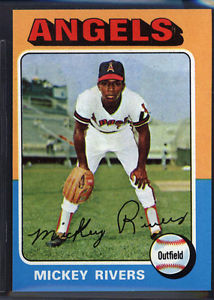 So yes, I have a very well organized 1600+ full run of Topps Angels cards arranged in three giant notebooks, which was my main goal all along. Plus there’s the big batches of Fleer, Donruss, Upper Deck, Bowman, Score, and a couple dozen other brands that I’ll need to get WAR-sorted some day. I’ve got duplicates organized in their folders, with the ‘90s+ yet to file, and I’ve got the triplicates by player which I’ll eventually transfer to notebooks as well.

BUT. What I’ve also got is a marvelous couple of shoeboxes of extras AFTER all that sorting, just waiting to be deployed as gifts, art projects, and/or ransom notes. My brother turned 50 this month, so he got a welcome little surprise from messers Fregosi, Ryan, Finley, Salmon, et al. My 6-year-old daughter, who is pretty blasé about baseball games not involving Mo’ne Davis, nonetheless is fascinated by Mickey Rivers, because she pointed at a couple of his cool cards, and I explained how he would walk up the plate like a 90-year-old man, but then lay down a bunt and get down to first base faster than anyone in the game.

If I rolled that way, I certainly have more than enough leftovers to re-sell back into the eBay void to make this midlife crisis profitable on paper, leaving aside the sunk costs of time. (I hasten to add for clarity’s sake that I do NOT roll that way, and will neither be soliciting nor accepting offers from any of y’all beautiful people; read the guidelines on this site, amen.)

But most importantly, I have an immeasurably deeper understanding of Angel history, one that I’ve only now begun to explore. Stay tuned to this space for morsels from that journey; in the meantime, I am happy to answer any questions about buying, organizing, and thinking about these marvelously trivial little rectangles, and even happier to hear tips from people who are smarter about this stuff than I!

* "Five years" is accurate but very misleading; I would basically go on eBay binges in the dark periods between the World Series and spring training, usually during whatever time I took off around Christmas, and I skipped at least one offseason during that time. You could totally replicate my collection in three months, if you were focused enough.