Why the rouge, Bilko? - Topps

As threatened, with this post I am inaugurating an occasional series looking at the Angels’ various years in baseball cards, starting from the beginning with the Topps set of 1961 (which, to remind everyone how this works, includes on the back of the card the stats from 1960). We’ll be looking at the teams, the history, the card values, the ugly mugs and hidden secrets, and will hopefully stumble into insights along the way of interest to those of you who don’t give a rat’s rectum about baseball cards. 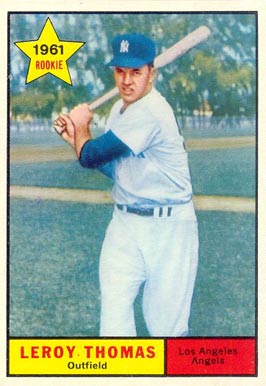 The 1961 set looks painted as much as photographic, with the resulting surreal effect seeming like it could have come from 1910 as easily 1960. It’s the last Topps collection that looks like this. The Angels players only occasionally come clothed in Angels gear—Eddie Yost, Rocky Bridges, Del Rice, Gene Leek, that’s it. The rest are most hatless, with vague, occasionally pinstriped jerseys. Twenty-three of the 27 are basically mugshots; the other four are in staged practice positions. Lotta burr-cuts, no facial hair, two sets of glasses, two guys with dark complexion (one from California, the other from Cuba). The colorful rectangles at the bottom of each card, showing name/position/team, have a pretty cool Midcentury Modern vibe, and I love the upper right yellow stars for rookie cards. 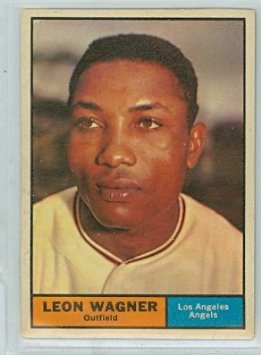 Best player the year before: 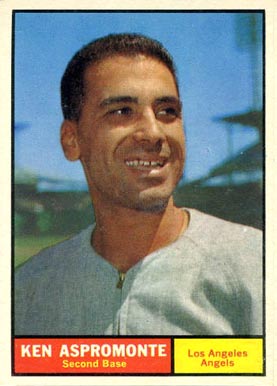 Ken Aspromonte, older brother of the marginally less mediocre Bob, with 2.4 Wins Above Replacement (WAR). The pre-expansion year of 1960 was far and away the best of Ken’s seven big-league seasons—the 28-year-old 2Bman hit .288/.362/.400, for an OPS+ of 109, after being traded from a part-time job in Washington to a starting role in Cleveland. He established what would end up as career highs in every major offensive category; in fact, the rest of his career he would be below replacement level, at -0.6 WAR.

How many players are like that, I wonder? Only one season qualifying for the batting title, but a good one, even though the rest of the career ain’t much. Reggie Willits is the only such player whose lone season was with the Angels, though his wasn’t nearly as good. J.B. Shuck almost qualified for the batting title that one time….

Anyway, the Angels actually didn’t select Aspromonte in baseball’s first-ever expansion draft; but since AL President Joe Cronin did such a piss-poor job keeping track of the draft’s arcane rules about how many players from which positions could be drafted by which team from which other team, he ordered a post-draft Senators-Angels trade of Aspromonte for the delightfully named shortstop Coot Veal. Like the Cooter, Kenny wouldn’t amount to much for his new team, losing his starting job in early June after hitting just .227/.312/.295 in the bandbox of Wrigley Field, and then getting selected off waivers by the Indians in early July. The Angels had by then traded for Billy Moran, who would hold down the 2B job for most of the next three years, even making an All-Star team and getting some MVP votes.

Aspromonte, who would later blame his disappointing MLB career to his hot Brooklyn/Italian temper, went on to play in Japan, came back to manage in the minors for the Indians, and eventually became one of six original Angels to graduate to the big-league managerial ranks, along with Eddie Yost (0-1), Del Rice (75-80), Buck Rodgers (784-774), Jim Fregosi (1028-1094), and Chuck Tanner (1352-1381).

Aspro’s record in Cleveland from 1972-74 looks deceptively mediocre: 220-260, for a .458 winning percentage, or a 74-88 pace (there was a mini-strike in ’72). But the team had been brutal the three years before he arrived, with an average record of 66-96, and were fresh off their worst season (60-102) since back when the franchise was still called the Naps. Aspromonte took that desultory bunch and immediately improved them to 72-84, and over the course of the next three years made regulars out of an impressive number of solid-to-great young players: Buddy Bell, George Hendrick, Oscar Gamble, Dick Tidrow, John Lowenstein, Jack Brohamer, Frank Duffy, Charlie Spikes, Milt Wilcox, and John Ellis. He also managed the best three years of Hall of famer Gaylord Perry’s career, beginning when the spitballer was 32 years old. In 1974, he had the Indians in first place as late as July 12, and within 5 games of the lead as of Sept. 11. Then on Sept. 12, Aspromonte’s promising managerial career was cut off at the knees 10 days before his 43rd birthday via a waiver trade with…the California Angels.

According to Russell J. Schneider’s Frank Robinson: The Making of a Manager, here’s how things went down: Indians General Manager Phil Seghi came into the manager’s office at 1:55 p.m. on Sept. 12, and said, "Hey slugger, I’ve got the right-handed hitter you’ve felt you needed to win this thing." That was the first Aspromonte had ever heard of trading for Robbie. It gets worse, from his point of view:

Five minutes later the announcement was released to the media, and speculation immediately began that Robinson would become the new manager, and that Aspromonte would soon be out.

Good luck managing through that! Though Aspromonte had supporters in the clubhouse and press, some players—most notably George Hendrick—thought he was too much of a hard-ass, and Seghi (along with MLB Commissioner Bowie Kuhn) had an eye on making history in hiring baseball’s first black manager. With the new clubhouse divisions making headlines every day, the team tanked down the stretch, losing 14 of its final 20. Robinson was announced as soon as the season ended. Aspromonte, despite breaking in all that talent, never managed again. (Robinson did go on to have a decent managerial career.)

So was Aspromonte’s career truncated because he was too hot-headed to get along with star players? Maybe. He had also irritated a young and gifted Graig Nettles, precipitating a trade that helped win the Yankees some pennants. But, 1) that was mostly over him pinch-hitting Nettles in key spots against lefties, and 2) uh, you might recall the manager Nettles had in New York. The ‘70s were a high-water mark for high-blood-pressure managers, and I don’t think Aspromonte could rival Billy Martin and Dick Williams and Whitey Herzog and Earl Weaver on that score.

So was it because people disrespected the first manager in MLB history to lose his job to a black guy? That sounds implausible to our 2014 ears, and even though I’m old enough to have seen the kinds of racism that people half my age would have a hard time believing, I just don’t see this is as a dominant factor.

In the absence of other explanations, I’m inclined to believe there isn’t a single smoking gun, but rather some combination of the above, plus the lousy way that the shabbily run Cleveland front office treated the guy, and the mathematical brutality of having just 23 other managerial jobs back then. Given his record, I suspect that a good young manager got jobbed in a way that he probably would not now. 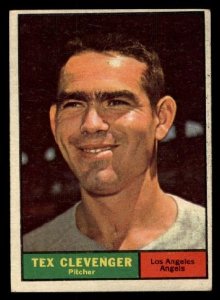 Now THAT’S what a ballplayer looks like: Eddie Yost. 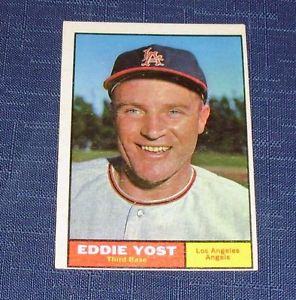 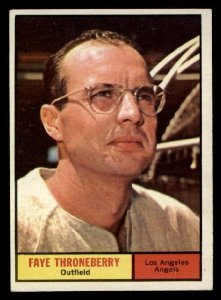 Missed it by THAT much: "Johnny is working to improve his control," the little cartoon informs us on the back of Johnny James’s card. That work did not pay off: James walked 54 batters in 71.2 innings for the Angels in ’61, and never pitched in the big leagues again. 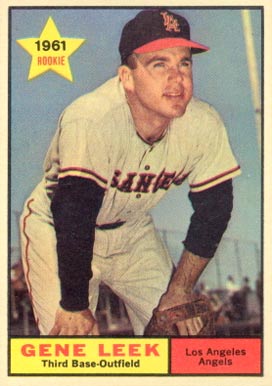 Bill Rigney is set in front of what looks like a sideways French flag; perhaps because his image was crudely photoshopped from his Giants pic the year before. 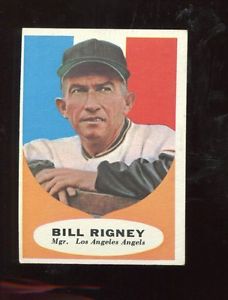 Say, Matt, did you ever write anything about any of these guys?: Say hello to your little friend, Julio Becquer.