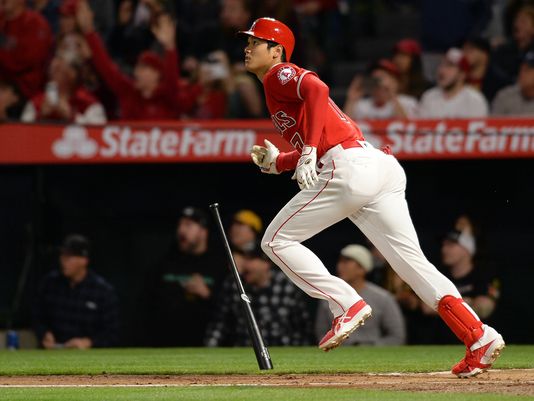 Shohei Ohtani launching home runs may be the best we can hope for in 2018.

OK, time to put away your Kleenex box. Drink like a fish if you must, but Shohei Ohtani is gonna be just fine. … Just fine.

Did you know that silver is one of the Angels’ four official colors (*see below)?

Well, you do now.

After a day of news that ranged from the super-scary (Shohei Ohtani has a Grade 2 UCL sprain, driving many members of this community to drink large amounts of alcohol), to the somewhat not good (Kaleb Cowart went on the DL too), to the somewhat cool (Ohtani’s injury means 29-year-old Cuban defector Jose Fernandez gets his MLB debut) – good old silvery haired Stu is here to present you with some silver linings.

Ben Lindbergh summed it up quite soberly on his Effectively Wild podcast with Jeff Sullivan, Friday:

"I don’t have to tell you that this is pretty terrible news about a player whose success has been one of the highlights of the season," Lindbergh intoned somberly after the news hit him, sounding like Edward R, Murrow on the radio during the bombing of London in 1940.

Then Ben pointed out that only 16 of the 33 pitchers who have had plasma-rich platelet injections have avoided Tommy John surgery.

OK, turn off the mic, Ben. I love your podcast, but that’s like predicting almost everybody in Saving Private Ryan dies.

I’ve been through a lot of crap in my life. I don’t need this on top of it.

I don’t have to tell you that this is pretty terrible news about a player whose success has been one of the highlights of the season. ~ Sherlock Holmes Ben Lindbergh, Effectively Wild.

So, I propose a drinking game! Since many of you (and me) are already doing that. Imbibing adult beverages of various types.

Every time I mention the words Tommy John or TJ surgery. Drink in sadness. You owe me a shot from a couple sentences ago.

Every time I mention Ohtani playing again in 2018. Drink in celebration.

And this is the worst-case scenario: Let’s say after the platelet-rich plasma and stem cell injections Ohtani received from team doctor Peter Yoon, Shohei still has a sore arm and the Angels don’t feel comfortable with letting their prized asset from Japan play at all this. season.

That means the Angels shut him down for the rest of the season, and Ohtani must have Tommy John surgery (drink), and will come back 100% healthy some time in 2019. That’s a good thing, as the Angels have control of the 23-year-old Japanese star until 2023.

But guess what? Sho-Time is coming back way sooner than that, and when he comes back, he’ll be fixed. He won’t forget how to pitch in the interim. Pitchers quite often continue working on lower-body pitching mechanics after having the dreaded TJ, and usually come back as good as ever. Knowing Ohtani, he would use his sudden spare time to study video of batters and hitters throughout baseball to figure out how best to conquer them when he’s healed.

The real-life problem for most of us mere humans is akin to that messy bathroom you’ve been wanting to clean up perfectly for a while.

It feels a lot better once it’s clean, doesn’t it?

We’ve been down this road before. Of the five starting pitchers remaining from the Angels’ six-man unit (for the next three weeks officially), four of them – Garrett Richards, Andrew Heaney, Tyler Skaggs and Nick Tropeano – have battled elbow trouble and all of them have come back better. Four of the five have ERAs south of 4.00, and Tropeano hasn’t been bad.

I won’t say the fifth guy’s name out of feat of jinxing him, but you know who he is because he leads all Angel pitchers in the archaic stat of wins (his initials are JB).

The Angels medical rehab staff are the best in the business. They’re like Navy corpsmen on Omaha Beach. They’re busy, real busy, but they know how to handle a casualty list, fix guys up fast, and get them back on the field after the bad stuff has gone down.

Let’s take the case of Richards first, because he was the team’s nominal ace before Ohtani’s comet-like rise. A home-grown Angel, Richards was diagnosed with a torn UCL on May 6, 2016 and wailing and gnashing of teeth began around these parts. Richards opted against TJ surgery, paying for his own stem-cell injections and taking a team-provided PRP shot too. Since his return, Richards has pitched more or less like the ace he’s supposed to be, and he looked like it again on Friday.

The Angels medical rehab staff are like Navy corpsmen on Omaha Beach. They’re busy, real busy, but they know how to handle a casualty list, fix guys up fast, and get them back on the field after the bad stuff has gone down.

Andrew Heaney. The crafty lefty out of Oklahoma State tried PRP after having elbow soreness in a brutal April of 2016. He succumbed to TJ later that July. I was so depressed I moved to France. But, I digress: Just days ago, Heaney pitched a 1-hit shutout against the Kansas City Royals.

The Angels have traded for Skaggs twice, that’s how much they like him. The southpaw had his TJ in August 2014, and if you’re not already hammered, please continue reading. Because now Skaggs seems like he’s worth the price the Halos paid for him in two separate deals, Joe Saunders, Patrick Corbin (wouldn’t mind him back) and Mark Trumbo.

Let’s say the Angels decide to forgo Tommy John surgery and continue to let Ohtani heal – and beat the hell out of the enemy with his bat alone. This might be the coolest of all scenarios, because the Angels’ conquering samurai with a big sword.

He might still be able to bat during the rest of 2018, even if he can’t pitch. We don’t know yet.

But, if Ohtani can focus only on one thing – like trying to mash home runs halfway to the moon, Alice – then the Angels have a full-time DH who would be one of their most-feared bats, and that’s all he needs to think about.

Think how scary that might be in the heart of the order? A DH who rakes in the lineup 6 days out of 7. Wow. And can’t the Angels just use a bat like that full-time without this pitching stuff?

Just hit a ton of dingers and to hell with Tommy John. (Drunk yet?)

We were lucky to get Ohtani in the first place.

And damn, weren’t the Yankees, Mariners and Dodgers mad about that? And they’re still going to be mad when Shohei Ohtani is fully recovered and starts mowing down their batters like damfools again, as Shohei The Pitcher, as soon as he can.

Shohei Ohtani was supposed to suck.

At least that’s what Yahoo Sports’ Jeff Passan made us awake of after spring training. He quoted a scout who said Ohtani had a high-school curveball (he doesn’t).

Passan was also the reporter who leaked news of Ohtani’s then Grade 1 UCL sprain. Passan was right about that, and Ohtani possessing some of the best heat in the majors probably didn’t help in stopping Ohtani’s UCL tear increasing to Grade 2.

Among major league pitchers, according to Statcast, Ohtani’s four-seam fastball perceived velocity has been 97.3 mph, which puts him in elite company, and includes three hurlers from New York City – Luis Severino, Noah Syndergaard and Jacob deGrom.

Billy Eppler may make a move to get an under-contract top of the rotation ace (think of the Mets’ Jacob deGrom). It will cost prospects and the cost may be prohibitive for an ace of deGrom’s caliber, but is it worth trading top pieces from a finally improved farm system to get a deGrom – who has already had his Tommy John surgery and a nice haircut instead of that silly long hair he used to have. Dude, seriously.

OK. That’s all I got. Angels fans will all make it. And Shohei will be fine. You’ll see.

Which of the Shohei Ohtani silver lining options do you like the best?