As the Angels move into 2019 with three of the most exciting players in baseball, Trout, Ohtani, and Simmons, there are often conversations on Halos Heaven about what help is coming from the farm and what it means for our competitive future. This is especially common as we have conversations about the Angels apparent goal of trying to compete now while rebuilding the farm for the future...a feat which not many other teams in the MLB even try.

It’s commonly accepted that the Angels Farm was among the worst if not the worst in the league when Eppler took over and is somewhere in the middle of the pack now. But, what does that really mean as we think about where it will place us competitively relative to other teams?

Personally, I find that a rather hard thing to absorb just because it is so much information. There are plenty of farm summary reports around, but they usually do something like have a ranking and then the top 10 players for each team and rapidly become too much information for those of us with day jobs and/or families to raise. None of us are getting paid to track all of the minor league prospects of every team!

However, there is an absolutely brilliant series of articles (in my opinion) from Craig Edwards at fangraphs on the topic from mid-November that I want to draw the Halos Heaven faithful’s attention to if you haven’t seen it. The best article to start one is the one titled "Post-2018 Farm System Rankings".

It’s actually preceded by a series of articles he wrote that really get into what he’s doing and why, but the core idea is this: Mr. Edwards builds on others work summarizing scouting efforts to divide each teams farm system into quality of prospect ranked 40 - 70 where 70 is really, really good and 40 is pretty meh. He then assigns an expected WAR to each player based on their scouting evaluation and ranks each team according to their total WAR of their noteable prospects. Interestingly, the ranking really comes out more or less like what I’ve seen from the numerous more subjective rankings that come out. So, it appears to me to work pretty well.

What I really like about it, though, is rather than producing a hideously long set of words to evaluate and compare each team's farm systems and rapidly become too much to absorb, Edwards produces a really nice table that makes it super easy to follow at a glance where each farm system stands. I have copied the table below, but please see his article to get the full context. 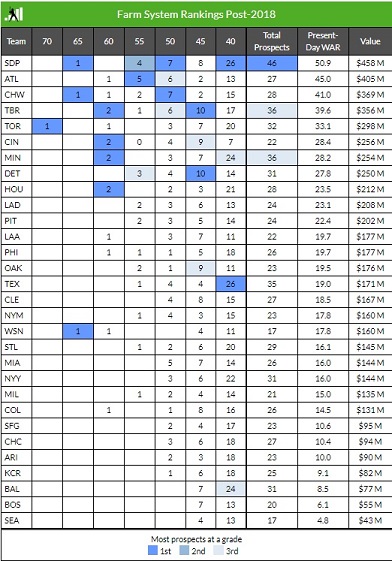 From an Angels perspective, what does this mean? By and large, nothing that hasn’t been discussed here many times. The somewhat binary nature of our current prospect list is very visible. Without Adell, our farm system would be ranked in the bottom 10. However, it does have Adell and really the overall value of these farm systems often really depends on a handful of guys. So, having Adell there definitely counts. Also, I think we all have high hopes for Canning even if this has him ranked as a 50, which isn’t bad.

It’s also pretty clear why everyone has us ranked somewhere in the middle. Some of the farm systems above us are clearly MUCH more stacked than anything we have. We aren’t even close. Some of the ones below us are practically barren. I like that this chart makes that so easy to see.

Within our division and at the time the article was evaluating, we are far above the Mariners (no surprise) and about par with Oakland and Texas. The troublesome thing is that the Astros, you know that juggernaut team at the top of our division, also has a significantly better farm system than ours.

The overall point of my post here is really just to draw everyone’s attention to Craig Edwards brilliant series of articles.

However, my secondary conclusion is that, like we all know, the Angels have a middle of the pack farm system. In one sense, that’s great because we are used to having absolutely nothing in the farm after the Dipoto years and this is a gigantic improvement from what we are used to, but in another sense we really shouldn't expect our farm system to take the league by storm anytime soon. Whether or not a middle of the pack farm system might still be enough to get us over the hump is a topic for another post.

I wanted to make the comment that I think that is correct and I think that's precisely what Mr. Edward's analysis does only he attempts to do that quantitatively rather than conceptually. Each player is assigned an expected value based on his scouting rating and the historic performance of players with the same scouting rating.

I'm not going to go into details of his calculations other than to say he's attempting to do net present surplus value, but the last column in his above graph is what he has calculated to be the overall value of all the prospects in the system with 40 or higher FV. To give everyone here a better sense of what that means for Angels, I have complied (I hope correctly) the value as relates to the Angels Farm. It is shown below.

As you can see, Adell really drives a big percent of the overall Value, but it's not like he is all of it or even the majority of it. In fact, all of the 40 and 45 guys added together equal, in terms of expected value, Adell.

I hope this provides a somewhat better picture of what Mr. Edwards is doing and how it definitely attempts to capture quantitatively what a lot of folks are trying to describe conceptually, which is that out of a big pile of prospects, most will flame out, some will be serviceable, and some will be all-stars. Edwards has gone through a lot of effort to try to put a number on that, which is part of what I think is really cool.