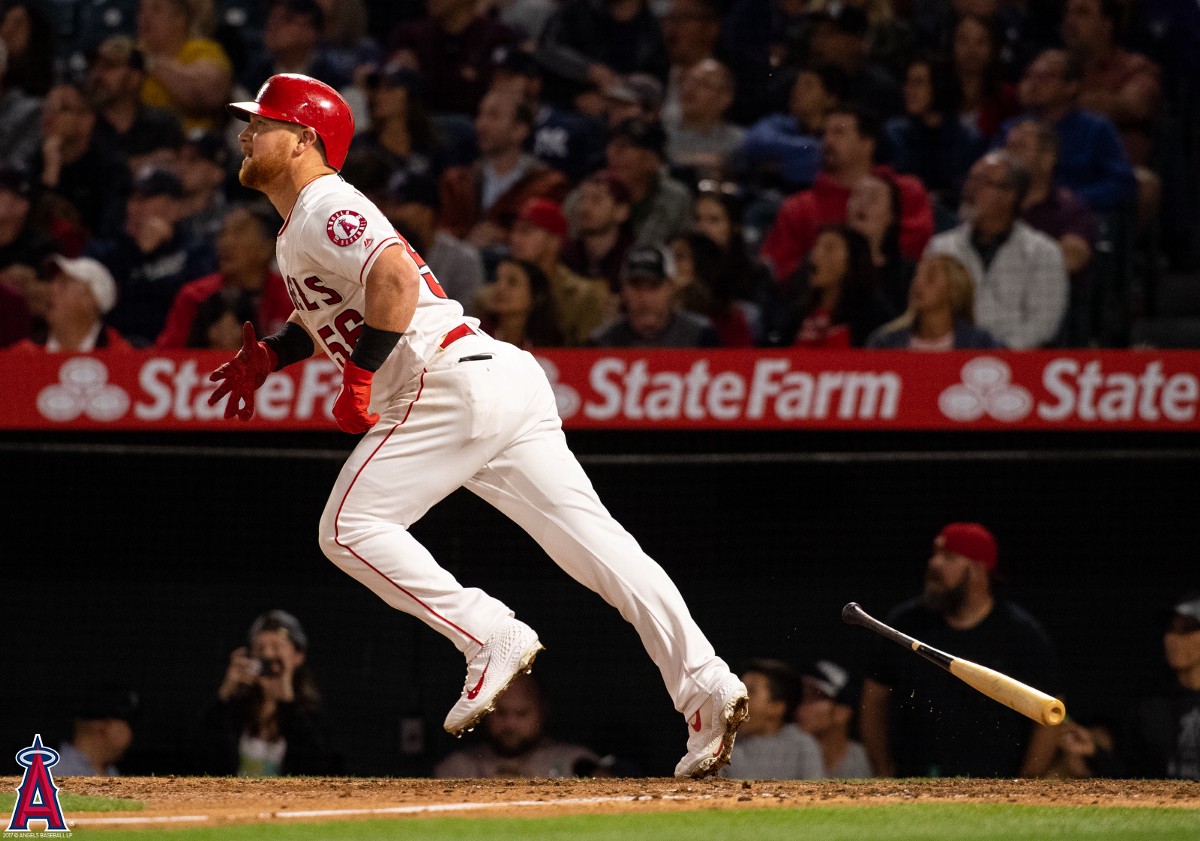 It is true that Kole Calhoun has not been very successful when he has come up to bat this season with no one one base. As of this writing, he has only a 0.34 Total Bases Created per Plate Appearance when there are no ducks on the pond, and if you have been following my TBC reports, you know that that is not good number to have, not when the average TBC/PA with the bases empty in the American League West is 0.56.

Put runners on base for Calhoun, however, and he is able to transform his mild Dr. Jekyll into a beast of a Mr. Hyde. With his terrific performance last night, Calhoun now has a mightily impressive 2.10 TBC/PA with runners on base. Mike Trout has been second best on the Angels so far this year with a 1.79 TBC/PA. The division average, which now appears tiny in Calhoun's rearview mirror, is 1.24.

In fact, Kole Calhoun has not only been the best on his team at creating bases when runners are on base, but he has been the best in the entire division. Here is the top ten:

The past few years, baseball thinkers have been poo-pooing the importance of collecting RBIs as a valid skill, emphasizing the fact that the act of driving in runs is dependent upon other people getting on base in front of you, so it is more a group project than an individual achievement. I, however, have always opposed this point of view. In addition to talent and hard work, psychology is an equally important element to a baseball player's success, and for some reason, some players have the psychological state of mind to thrive in RBI situations, where other players, no matter how otherwise successful, do not.
So far this year, for whatever reason, Kole Calhoun has been a much better hitter when one or more of his teammates are on base, waiting to be moved over to the next station and beyond.
Obviously, with his Jekyll and Hyde splits with the bases empty as opposed to having runners on base, Calhoun should not be hitting in the leadoff spot. His talents right now dictate that he hit somewhere in the heart of the batting order.
If you had been following along with the comment thread in Stirrups' "Thorslinks," you know that I subscribe to a certain batting order construction theory. Just for fun, I took each player's plate appearances from last night's game, and I put them into the batting order that this theory says the Angels should have used last night in order to maximize their offense:
What happened in this virtual game was that the Angels had scored 12 runs by the end of the sixth inning (and that was without using any Yankee errors to move Angel runners along) before I ran out of actual plate appearances to keep my simulation going. According to the theory, the Angels should use the following batting order against KCR tonight to maximize their offensive output:
In the simulation for last night's game against the Royals while using this theory-suggested batting order instead of the Angels' actual batting order, the Angels scored 8 runs by the end of the eighth inning before I ran out of actual plate appearances to keep the simulation going.
Here's how the first inning played out in the simulation:
In Trout's first real PA last night, he got a single.
In Goodwin's first real PA last night, he flew out.
In Calhoun's first real PA, he drew a walk.
In Fletcher's first real PA, he had a single, so in the simulated game, the Angels scored Trout from second.
In Pujols' first real PA, he hit a HR, so the Angels were now leading 4-0.
In Simmons' first real PA, he grounded out.
In Smith's first real PA, he grounded out.
Inning over.
The Angel lineup for tonight's (Saturday's) KCR game has finally been released. Here is the algorithm's batting order for maximum offensive output using tonight's players:
Brad Ausmus only has three spots in his batting order that matches the algorithm's, and in the announced lineup, Ausmus has Calhoun batting leadoff. I'm excited to see if the algorithm can beat Ausmus' batting order three games in a row.
A Sunday morning run-through shows that the actual lineup beat the algorithm's lineup, but only by one run. Although with two outs in the eighth inning of the simulation, I ran out of actual plate appearances to keep the game going. I will keep this up for a little while longer, letting the sample size multiply in my Petri dish, to see if the algorithm can show a pattern of dominance.
So for the Sunday afternoon game, the algorithm lines up the Angel batters thusly:
Manager Ausmus, if indeed it really is the manager anymore who makes out a Major League team's batting order, has four matches with the algorithm in the 2/3/8/9 spots. Ausmus has Calhoun slated to bat first instead of fourth yet again.