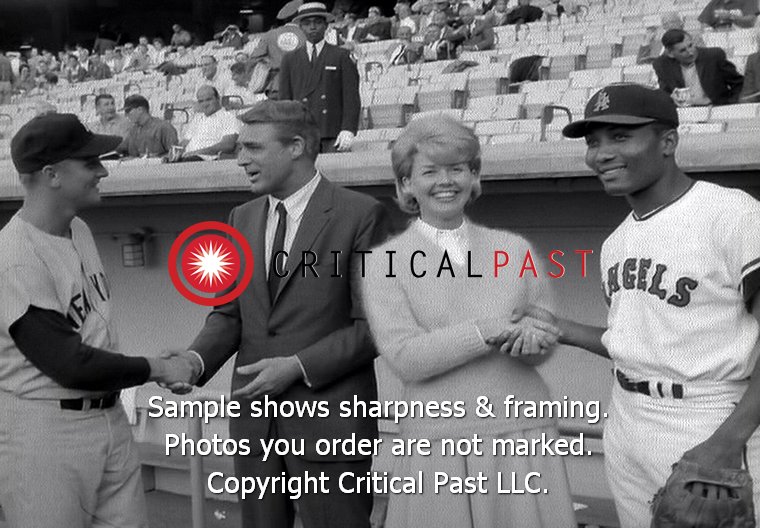 In 1962, Doris Day had a summer hit in the romantic comedy, That Touch of Mink, which also starred Cary Grant. In the film, Grant was a co-owner of the New York Yankees, and as such, he takes Day to a game where they get to watch from the dugout. There is a funny scene that ensues where she starts heckling one of the umpire's calls and inadvertently gets Roger Maris, Mickey Mantle, and Yogi Berra, whom she was sitting with, all thrown out of the game.

Okay, so that was a film with a little bit of baseball in it, but what does any of this have to do with the Angels, exactly?

Well, on July 12th, 1962, the Yankees were in Los Angeles to play a series against the Angels, and the film studio thought it would be a good idea to have Day and Grant go to the game and take some publicity photos with the players to help promote the film. The two film stars arrived at the stadium early and posed with both the Angel and the Yankee players, and then they stayed to watch the game.

The game was an important one as the Yanks were in first place while the Angels were in third, just two and a half games out of first. It was a Thursday night game, and 40,259 fans showed up at Chavez Ravine to watch. The pitching matchup was Whitey Ford for the Yanks against Ted Bowsfield of the Halos.

Angel third baseman Felix Torres hit a bases loaded triple in the first inning to give the Angels a 3-0 lead, and the Halos never looked back, winning the game 5-4. The victory dragged the Yankees down into a tie for first with the Cleveland Indians and set the Angels just a game and a half out of first place.