It's not an uncommon topic of conversation here on HH to talk about the currently very bad performances of our big FA pitcher signings, Harvey, Cahill, and Allen.

We all know they are doing badly. But, how bad is bad? We also know that a lot of other FA pitchers haven't had a great start to the season.

One way to look at it is by comparing the performances to date of all the Free Agent 2018-19 starting pitchers.

I suppose I should take a second to get on my soapbox and point out that I personally don't believe you can isolate our overall starting pitching problem to just what Free Agents we did or did not sign in 2018-19, but rather what we have or have not built over the last several years.

That said, comparing things is fun and fairly easy.

So, without making any particular comments, I provide for your ease of perusal all the free agents listed as starting pitchers according to MLB Trade Rumors and their corresponding ERA, FIP, and xFIP according to fangraphs. I left out relievers because I think Allen kind of speaks for itself and it just creates a lot more noise in the chart.

I think the results are a bit of a Rorschach test, personally. While it's quite clear that our guys are at the bottom of the list, there are enough other under-performances to date to see a bit what you want to see.

What do you think? 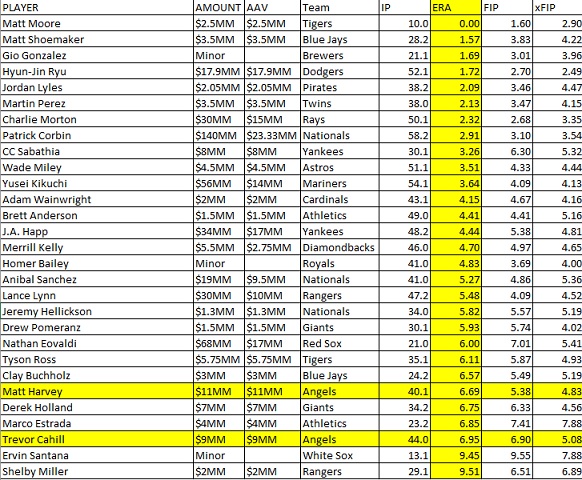