Why are the Angels hitting into so many GDPs?

OK. I'll spare the suspense. The short answer is, I'm not sure, but I'm going to roll with a couple of things. This isn't the type of a post where I feel like I know the answer though. I'm interested in hearing opinions.

Mr. Ennis and I were chatting about why the Angels were hitting into so many GDPs last night and it struck me as an intriguing question.

As we know just from watching games, the Angels are hitting into a ton of GDPs. They currently lead the league with 53 and it's not even particularly close.

The theory that was being bandied about in gamethread last night was maybe the high GDPs is because they are adopting a contact hitting philosophy that is actually working for them, but one result is they are getting a lot of contact with men on base which leads to GDPs. In other words, maybe it's a bad collateral effect from basically a good thing.

It was an intriguing thought. I definitely like that the Angels appear to be going counter to current MLB philosophy and actually taking a hit for contact approach rather than swing for the fences and who cares about strikeouts that most of the players in the MLB seem to employ today.

In fact, the Angels have the lowest K% in the entire league. That probably gets under-talked about here at HH. It's a very cool thing.

Could the fact that the Angels have the lowest K% in the league and one of the higher OBP be the reason for the GDPs? It makes a lot of sense logically. If they have runners on the basepaths and are making a lot of contact, more GDPs could easily be a result of that. I was trying to figure out if it was true, though.

I started off by looking at the core numbers I just talked about. GDPs, K%, and OBP. This is what we see. 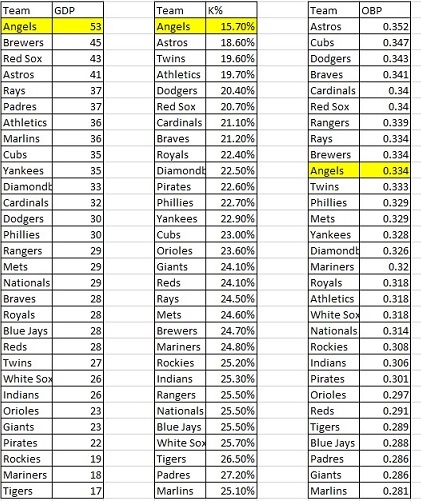 At first glance, there seems to be a lot of support for this theory. The Angels are best in the league in terms of K% and yet a top 10 team in terms of OBP.

So, yeah, the theory seems to make sense.

As supporting evidence, the team with the second lowest K% in the league (Astros), has the highest OBP percent and the 4th highest GDPs. So, it's not just us, but other teams too, which supports the theory.

By fan blog standards this is practically an open and shut case.

The thing that still bugs me, though, is that the Angels GDPs are still much higher than the Astros, 53 compared to 41.

That's a big number. So, I'm not sure the K% and OBP is the FULL explanation. Feels like a big enough number that there must be another explanation involved.

That's where our individual players come into play. I know my first reflex is to think of Pujols with his slow speed and high ground ball rate, but I think the answer is it's not so much him. At least, not more than usual.

I think the answer is Simmons. 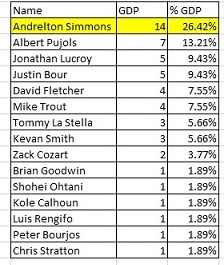 Simmons has hit into 14 GDPs already this year when he hit into 17 all of last year. While Pujols does have a high GDP rate, it's actually not much different than last year. He has 7 so far this year where he had 6 through May last year.

Simmons was a great contact, low K% hitter last year, so I'm not quite sure what's up with him this year that is different than last year.

Anyway, that's what I came up with. I think the GDPs probably are LARGELY the result of a good thing. The Angels having more people on the basepaths with a low K%.

But, I also think whatever is going on with Simmons is inflating the numbers significantly as well.