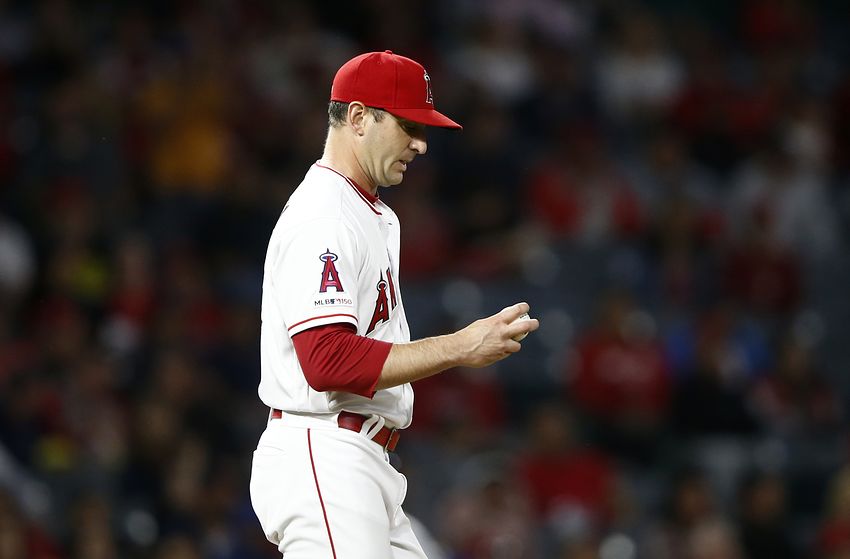 Although Harvey had a rough start he is starting to show good upside.

Taking A Look Back

The 2018 off season was a relatively quiet one in terms of adding big named free agents to the roster. While the Angel's weren't expected to make a splash because of their limited cap space, they managed to find a few "bargain players" who had potential to exceed expectations.

Eppler's signing of Harvey this off-season was a shot in the dark to say the least, but the risk of the contract was extremely low risk. Adding him to the rotation for 1 year, 11 M was a little more money than bargained for but if Harvey could get anywhere near where he once was, he could turn into the Angel's ace. After a rough first couple starts including his April 4 start against Texas where he surrendered 8 earned runs, he seems to have bounced back showing better pitch control and game management in his last few outings. Although he has been unable to get deep into games (which the Angels have struggled doing all year being last in the league in quality starts) he has taken upon himself to take a leadership role among his younger pitching staff. In an interview with Maria Torres, Angels writer for the Los Angeles Times, he aimed his message to his staff, "Just figure out how to get deeper in the game and keep the bullpen from coming in so early. It's a long season. Keep using these guys this early it's gonna be tough". Many of the games the Angel's have won have come in part from their surprisingly lights out bullpen. As Harvey stated he knew that this rotation hasn't been doing it's job and need to get things going so the bullpen doesn't run out of gas. On Wednesday, Harvey is scheduled to make his 9th start of the season against the AL Central leading Twins. Are we seeing a glimpse of the Dark Knight's return or the end of the road for Met's legend?

Cozart Not Too Cozy in Anaheim

In the 2018 off-season Eppler and Co. brought in 32 year old infield Zack Cozart from the Cincinnati Reds. Expecting him to be the starting third-basemen, Cozart under-performed and finished the season on the DL. Making a full recovery from his injury, the Angel's organization and fan base thought for sure last season's stats were just a down season. Oh were we wrong. Not only has he dropped his batting average to a career low of .131 but has also lost his starting job to Tommy La Stella. Although La Stella has played great through the first quarter of the season, even a mediocre stat line from La Stella would've been enough to earn a job at 3rd base from the struggling Cozart. In my eyes, going forward the Angel's might need to come to a conclusion on Cozart's status in Anaheim. Scheduled to make around 12 M dollars each of the next 2 seasons before becoming a free agent again in 2021, the Angel's front office might need to consider releasing him which would create more room to sign bigger named free agents in the years to come. The impression that most of us are under is that Cozart's time in Anaheim are certainly numbered.

Bour, Cahill and the Rest...

Batting third and playing first base Justin Bour! That was what Michael Araujo announced over the PA system in Angel stadium on April 4th's match up against the Texas Ranger's making Bour the Angel's 2019 season starting first baseman. A very stocky, power hitting left handed batter was set to be the Angel's everyday first basemen (switching time with Albert Pujols) and was expected to add significant home run totals to the lineup. Fast forward to today, Bour is batting .163 with only 4 HR through 30 games with the club. Being a very low risk free agent who didn't have a high ceiling, most Angel's fans aren't surprised by Bour's struggles. Including me...

Along with Bour, last off-season Trevor Cahill made the trip to Anaheim in free agency. Unlike Bour however he is a regular starter for the Angel's. Looking to add considerable depth to their rotation with the addition of a few veteran starters, Cahill signed a 1 year 9 M deal with the Angels. The 31 year old sinker-baller has been average to say the least so far this season. Posting a 6.95 ERA with a 2-4 record, Cahill has struggled with keeping batters inside the ballpark. As the stats may not show, Trevor limits runs per inning to a small amount but quite often he gives up the long ball which can prove costly in a tightly fought game.

Overall this year's free agent class that the Angel's have brought in has been quite mediocre. Mainly targeting "role players" or everyday players who may not have "All-Star potential", this year's class will most likely not impact much of the Angel's future organization. With majority of them on 1 year deals (Harvey, Cahill, Bour, Allen, Lucroy), we will most likely see the departure of most of these players unless they have eye popping numbers or are willing to resign for less money. With Trout's monster lifetime contract, the Angel's will be looking to lock up some big named free agents (preferably pitching) to surround him for years to come and hopefully bring us Angel's fans a World Series title!

Out of all the free agent signings, who do you think was the best one so far?