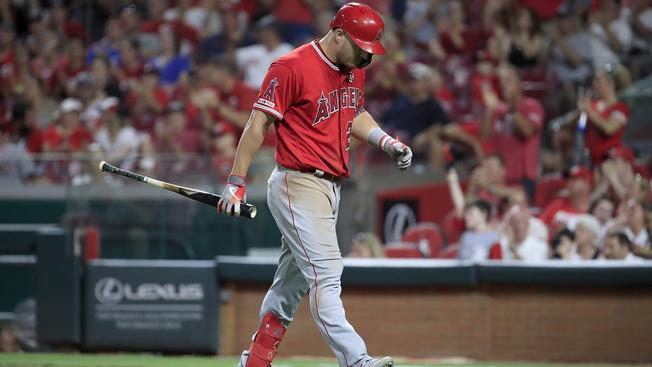 The 2020 starting pitching has just got to be more effective, and it has to go deeper in the game. For the first few months of this season, the Angels had one of the better bullpens in the AL, until the ineffectiveness of the rotation caused the pen to overheat and stall on the side of the highway.

To fix these systemic pitching problems, the Angels need to adapt the Astros' pitch selection philosophy where they use their effective pitches more often and their ineffective pitches less often. And when the Angels roll out their Ohtani-induced six-man rotation next year, they need to mandate that their starters make a one-inning relief appearance halfway between starts. What better way to use that extra day between starts than to substitute a relief appearance for a bullpen session to help ease the burden on the relief corps? The starters typically are your best pitchers, so why not use them in this out-of-the-box way?

If the Angels are going to be a legitimate playoff threat next year, though, the front office has to land a top-notch starting pitcher. This can be done through free agency or a trade, and the Angels actually have some enticing trade chips to work with. There is the Calhoun/Adell possibility which is doable because if the Angels part ways with Adell in a package for frontline pitching, minor league outfielders Brandon Marsh, Torii Hunter Jr., and Jordyn Adams are in the pipeline to cover the hole that losing Adell would create. The Angels are also holding on to three impressive first basemen in Jared Walsh, Matt Thaiss, and Jose Rojas who have nothing left to prove in Triple-A.

If I were choosing the Angel starting rotation for 2020, it would look like this:

That leaves Barria, Suarez, Beasley, and Castillo in Triple-A for depth when the injuries come, but it also leaves JC Ramirez out of the loop. If Ramirez is amenable to being a reliever once again, he would be the perfect long man to have in the bullpen, but if he would consider that a demotion and turn into a sour grape, I would add him to the trade chip pool and try to use him to help acquire a top-notch catching prospect if we were unable to pick up Grandal in free agency. Besides the possibility of moving JC to the bullpen, the Angels have a terrific minor league reliever in Issac Mattson who is ready to make the 2020 Angel bullpen even that much stronger.

On the offensive side of things, the Angel hitting coaches have got to work more to train their players to hit against the shift. There is so much OBP the Angels are leaving off of the table by not hitting into the defensive holes. Wait for the outside pitch, be late on your swing, have more of a closed stance, stand a little further away from the plate. This is a thing that can be done.

The Angels need to steal more bases, but in order to do this, they will need to hire either an organizational base running coach or a new first base coach to teach them the art of stealing, someone like maybe Chone Figgins, Davey Lopes, Bert Campaneris, or Rickey Henderson (he was an Angel once upon a time).

As David Fletcher has proved on a few occasions this year, the hit-and-run is a beautiful play that magically transforms a runner-on-first situation into a runners-at-the-corners situation. Teach this play. Practice it. Make good use of it.

As for the roster, the only position upgrade the Angels really need is catcher. The ceiling for every other regular position player the Angels already have ranges from above average to insanely great.

There are three tweaks I would make, however. For one, I would give Taylor Ward the keys to third base. His minor league OPS the past two seasons has been absolutely Troutian, and he deserves his chance to show what he can do as a regular in the Majors.

Secondly, at first base, I would continue with Pujols only if Jared Walsh was traded in a package for a frontline starting pitcher or an exciting catching prospect (it's too bad the Angels can't play Julian Leon behind the dish and then have Jack Kruger hit for him). Otherwise I would keep Walsh as the Angels' regular first baseman and have Pujols on the bench as the back up who would play occasionally at first, occasionally at DH and as my primary pinch hitter. He would make a great mentor for Walsh as long as his ego wasn't too bruised at his diminished role, but I would argue that a Pujols on the bench would be a valuable asset for the 2020 Angels to have.

Then thirdly, I would formally make David Fletcher be the Maicer Izturis/Ben Zobrist/super utility guy. He would rotate through third, short, second, left field, and DH. He would be a regular player, batting second in the lineup every day to make good use of his OBP and hit-and-run skills.

On the bench, the Angels would have the second catcher, Pujols, Rengifo, and Goodwin.
This sure seems like a team that should have much more than a less than 1% chance of making the playoffs come early September 2020.